After ‘You Can’t Stop Rock ‘N’ Roll’ blares over the speakers, Crowbar stride onto the stage to a huge cheer. It’s a little strange that such an esteemed band is opening a show of this size - but with the strength of the acts on tonight’s bill, no one can complain too much. Launching straight into ‘Conquering’, it ignites the sea of heads to lock into its midtempo groove. With fast parts, slow bits, gruff heaviness, and melodic twin-guitar harmony section, it encapsulates a lot about what Crowbar do into a few short minutes. New song ‘Bleeding From Every Hole’ goes down well, before the sludge-tastic ‘To Build a Mountain’ produces one of the night’s heaviest moments. It’s one of Crowbar’s most iconic tracks from their ‘classic’ era - though that isn’t to say that the likes of ‘Chemical Godz’ (dedicated to Kirk Windstein’s wife), which introduced the ‘Zero and Below’ cycle, doesn’t engage the appreciative audience, or ‘Cemetery Angels’, one of their strongest anthems since the 2010s, doesn’t completely destroy with its skullcrushing breakdown at the end. Regardless, they know what the crowd want, and most of their set is filled with songs that are at least twenty years old. Kirk Windstein narrates and talks to the crowd between songs like a maestro, with them hanging onto his every word, and he helps to initiate a chant of ‘Crowbar! Crowbar! Crowbar!’ before the final song, to which the audience are more than happy to oblige. The groove-laden ‘Broken Glass’ then sparks the first moshpit of the evening. The set highlights are the beautifully melodic ‘Planets Collide’ or the singalong, crowd-participatory hook to ‘All I Had (I Gave)’ - the usual suspects, perhaps - but there’s still plenty of gas in the tank, and the diehard fans in the audience still appear impressed when the ‘Zero and Below’ tracks are played. They leave hailed as the legends of metal that they are, and you seriously wish that they have a much longer set next time.

With smiles all around, Sacred Reich start their thrashy set with ‘Divide and Conquer’, from the 2019 album ‘Awakening’, to which they draw most of their set from. Though they spearheaded the second wave of thrash metal back in the 80s, there’s a tangible sense of fire and hunger to their set, possibly in part due to the new blood in the band, with young rhythm guitarist Joey Radziwill energetically drawing out riff after riff, and the return of legendary sticksman Dave McClain to Sacred Reich. Frontman Phil Rind talks a lot between songs - sometimes a little too much to maintain momentum - but his stories about Judas Priest (chosen due to performing in KK’s Steel Mill) and Rob Halford singing with the band entertain the crowd, and he gets the crowd clapping during the soft melodic intro to ‘Who’s To Blame’. He’s as good a singer as much as he is an entertainer, demonstrating a fantastic vocal range with plenty of balls to carry the performance. Dave McClain’s fills are also noteworthy, with his distinctive use of toms being part of his unique approach to drumming. The newer tracks are well-received, with the thrashy ‘Manifest Reality’ a set highlight and the monster groove to ‘Awakening’ going down well with the headbangers - but again, the chaotic pits are most electrifying for their older songs, a double-edged sword for bands who’ve been around for a long time. A frantic ‘Surf Nicaragua’ closes the set, and it’s these classic thrash anthems that really entice the crowd who have come for a rare Sacred Reich appearance in the UK.

After a rowdy singalong to ‘War Pigs’, Sepultura go on to demonstrate why they are still in the legendary leagues for in-your-face, groove metal. They stroll on to massive cheers, with Derrick creating his dominant stage presence before even one note is played. They open with ‘Isolation’, from 2020’s ‘Quadra’, which even the most diehard Cavalera-era enthusiast would struggle to deny is a seriously strong album through its own merit. If you take the last twenty-five years (yes, a whole quarter-century) of Sepultura as its own thing, there’s plenty of gems to be uncovered, and ‘Quadra’ is a clear highlight of this period. This album takes up about one-third of tonight’s setlist, though Derrick reassures longtime fans that the band would play songs from all eras of Sepultura, promising everyone that an amazing evening would be had. They certainly deliver.

One of the best things about Sepultura in 2022 has to be the commanding Eloy Casagrande behind the kit, who only joined the band when he was 20. His performance is absolutely crushing - whether doing his own thing in newer songs such as ‘Means To An End’, or replicating the tribal feel to classic tracks such as ‘Territory’ or ‘Refuse/Resist’ more convincingly than anyone who isn’t Iggor Cavalera himself could. We are also reminded of the strength and power that Derrick brings as a frontman - his vocal style is brutal and a worthy pairing with the music behind him - though his clean vocals over ‘Machine Messiah’ and ‘Agony of Defeat’ are very convincing as well, proving his dynamism and talent as an all-round vocalist. Andreas Kisser seems to effortlessly switch between ripping through dizzying leads and his rhythm guitar playing, and though they lack some of the raw power and sound with just a single guitar compared to two in both preceding bands, Sepultura make up for it with the pure intensity that neither of the others bring, and the crazy tribal rhythms that few metal bands do as well as they.

The pits are unparalleled compared to most metal shows in a slightly more compact KK’s Steel Mill tonight. And the crowd don’t mess about when Sepultura pull out songs from the classic ‘Arise’, ‘Chaos AD’ or ‘Roots’ - when ‘Cut-Throat’ is performed midway through the set, the first of the night from the Cavalera era of the band, the audience feed back with an insane energy and a new fire to their moshes. The supply of crowdsurfers feels endless at times. The triple-punch knockout of ‘Arise’, ‘Ratamahatta’ and ‘Roots Bloody Roots’ - the latter complete with a spine-tinglingly brutal live outro - threatens to shake KK’s down to its foundations, and Derrick appreciatively declares tonight as the "best f*cking show of the tour". There’s a lot to take from tonight’s Sepultura show - no, Max Cavalera isn’t fronting the band anymore, but particularly since the introduction of Eloy Casagrande, there is grounds for arguing that a new classic era of Sepultura is well underway, in a manner that has gone slightly under the radar, due to the large shadow of those earlier albums. Sepultura’s use of a backing track is hugely effective, adding power to a raw performance rather than adding layers to the band to make them sound artificial. And yes, they’re still going to tear the house down when they play those older songs. If you’ve seen the Cavalera brothers’ recent Return Beneath Arise shows, you’d be within your rights to argue that Sepultura, as they are now, still deliver them best. 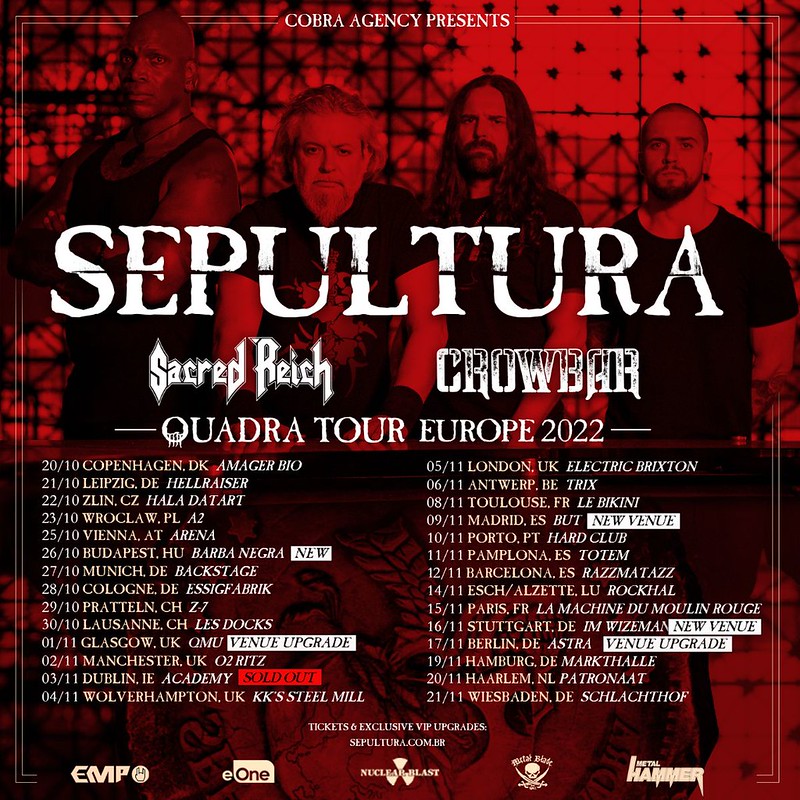