My final show of 2022 was the KDS Punk Xmas Party at this venue and, in more amazing symmetry, my first show of last year was an early January Gimp Fist gig on this very stage. It’s always a pleasure to return to my ancestral homeland and, with plenty of mouth-watering Punk shows on the KDS roster, it looks like I’ll be coming home more often. And, what better way to blow out the post-New Year doldrums, than three exceptional bands?

First up is MC16, a three-piece with a huge heart, rock up for their first show of 2023 following an impressive Rebellion show back in August. I was betwixt sets on that day so didn’t manage to catch the full performance but was determined to right that wrong today. Musically, MC16 play short, sharp punk attacks, all built on a solid rhythm section and some seriously infectious grooves.

A sizable crowd has arrived early, which is no mean feat considering the railways are on strike today. Those of us in attendance are treated to some fat basslines for the Ska-infused, United States of Generica; Burn It Down is preceded by the fact that a YouTube video of the band was responsible for a family reunion.

MC16 very much wear their political colours on their collective sleeves, so tracks like Class War and the anthemic, Anti, come as no surprise. But it’s the devastating Sleeping on Cardboard that should become their signature song. Highlighting the plight of service personnel who find themselves homeless, it is a heart-rending as it is poignant. The band’s support of the charity All Call Signs cannot be overstated as a cause in need of much love.

Singer and guitarist, Carson, seems to spend as much of the set in the crowd as he does on the stage and, at one point, even passes his guitar to a body in the front row and does his best Bez impression as the rhythm section pick up the slack.

Fired up and raring to go, MC16 create a big noise for a trio and is the perfect opening salvo for the evening.

When the world came back online in the autumn of 2021 there was a period in October that I seemed to be seeing Vomit at every show I went to. That’s not a complaint, by the way and their work warming us up for Stiff Little Fingers and Cock Sparrer was not wasted. Sandwiched between two trios, the quintet that is Vomit made the Boulevard’s stage seem rammed and an early lighting fail has the normally cucumber-cool tech pressing buttons and jiggling cables.

The Staffordshire lads have been at this a long time now and have lost none of their energy and entertainment factor. 21st Century News skips along at a fair old lick but cannot hide its dancing beat; Dirty Toys is built on a rocking foundation and includes a singalong chorus. When’s It Going to Start? merges Ska, Reggae and Punk into an irresistibly catchy sound, while Isolation takes a turn for the more alternative.

Vomit is able to balance the traditional first-wave punk sound, imbuing an occasional Ramones-vibe, with a faster, more fierce UK82 attitude, building on hefty percussion and fat basslines; their newbie, from a forthcoming album, continues the progression and makes full use of the twin guitar attack and a solid beat.

The original Punk spirit of ’77 is alive and well and Vomit exemplify the endearing and enduring legacy of the time. And, as always, they are a absolute blast and never disappoint.

But, folk have travelled from outside the district, from the far-flung corners of the kingdom and not just for the pies, but for one of the county’s best kept musical secrets: Gimp Fist. The Bishop Auckland trio have been making wonderful Oi! noise since 2005 and have been putting out a consistently high quality series of nine albums since 2010’s seminal Your Time Has Come. Last year’s duo of Isolation and Unification showed the three-piece of brothers Jonny and Mike Robson – vocals/ guitar and drums respectively – and bassist Chris Wright are as potent in the studio as they are on a stage.

Long time set opener Fists in the Air has been replaced of late with the title-track of 2010’s other album, The Place Where I Belong and demonstrates what everyone at the Boulevard already knew: Gimp Fist are a class act from the start. There’s no warming up here or need to get in the zone, rather they hit the stage prepared to tear Wigan a new one. The anthemic Working Class follows and so begins the perpetual motion that is the pit.

Such is the stature of the band that their shirts are prevalent even at shows they aren’t playing; but when they are in town and it’s wall to wall Gimp Fist Tees, you can be sure the crowd are going to make hay. Whether that be the greeting of the fist-pumping favourites, like Marching On and On, Top Dog and My Life, or newer songs like Blood’s The Fight in You or last year’s Can’t Win ‘em All and Victory. Those newer songs fit into the Gimp Fist repertoire with ease; Unification’s Curtain Call hitting like a bulldozer, while the same record’s Bent Out of Shape is some unrelenting Oi! and is built on Mike’s ferocious drumming.

Jonny dedicates Fallen Apart to his percussive brother and asks that the pit mind Chris’ microphone stand as he doesn’t want to have to go for a dental reconstruction. It’s all done with tongue in cheek as the rambunctious pit is fuelled by a combined love of the band. The ceiling of the Boulevard is no more than ten feet high, but that doesn’t stop motivated crowd surfers and stage divers taking to the air. Still, when the most dangerous thing is friendly fire and you’re part of a good-natured pit, then where’s the harm?

Jonny Robson’s day job is as a First Responder with the NHS, so when he writes his working class anthems he does so from a position of authority. Which is probably why songs like Working Class, A Country Divided and First In Line drip with genuine passion. The last song of the night, Here I Stand, is Jonny’s defiantly proletariat statement of reckoning. The charged chorus sees the stage invaded and the pit in full flow as the band all-but turn the vocals over to the fans.

Before that was their cover of Perkele’s Heart Full of Pride has become a staple of the live shows and can be seen as being joint custody between both bands. Filled with the power and passion of the original and greeted like the oldest of friends, a Gimp Fist show just wouldn’t be the same without it.

Firmly established as one of my favourite bands, Gimp Fist never fail to deliver and with the support of Vomit and MC16 this was a fine way to start 2023’s live calendar. The bar has been set incredibly high already and the Christmas decs are barely even away. 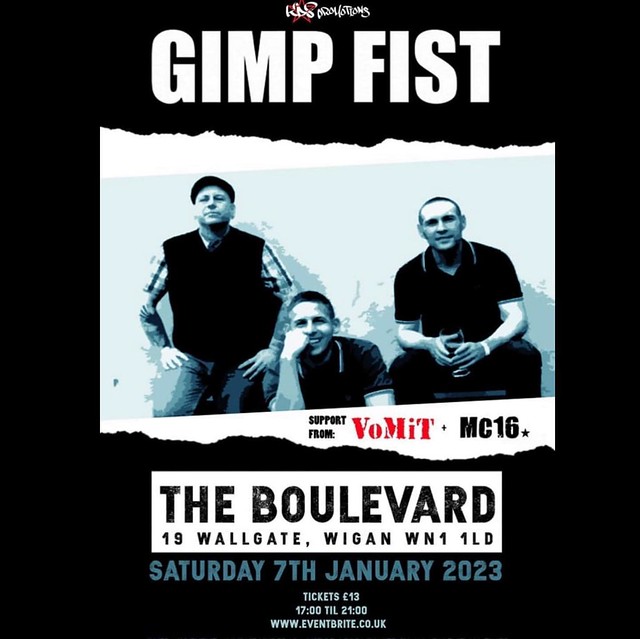