Mortiis as a person will probably not need much of an introduction to many of our readers. He began his musical career as the bass player for Emperor in the early 90’s before leaving and forming his own project, named after himself. He has since gone on to become the undisputed inventor of the dungeon synth genre. Twenty seven years on and the band have 13 studio albums behind them, the fourteenth – ‘Spirit of Rebellion’ – is released at the end of January. The album artwork has been created by David Thiérrée who has also worked with the likes of Behemoth and Primordial. 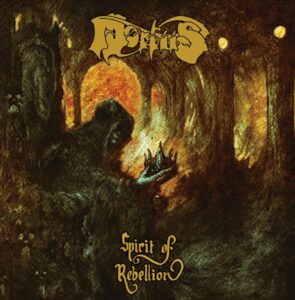 The album is unique from the off, split into two 20+ minute songs, effectively two sides of an L.P. in old money. Side one is ‘A Dark Horizon’, twenty four minutes in length, it opens with a clanging noise in the distance, slowly getting louder, then Mortiis synth kicks in. Like an excerpt from a Game of Thrones soundtrack, its tune is meteoric, images of an ancient army preparing for battle spring to mind. Mortiis’ music does the talking with lyrical content non-existent. But the music talks to the listener so well, painting pictures in your mind’s eye. The 24 minutes pass quickly as you take in all the music has to offer, if ever you wanted an example of how music alone can tell a story this is it.

Side two, features the twenty six minute track ‘Visions of an Ancient Future’. Immediately the sound is different, the gothic, historic feel of the previous track replaced with a more modern day twist. An anthemic intro builds in volume and intensity, it draws you in again as you listen along. This track has more warmth to it, it’s uplifting as the title suggests looking towards the future rather than battles once lost. It gives hope to the story being told and whilst lyric-less you fully understand the story Mortiis is telling.

This album may not be everyone’s cup of tea, certainly those hard and fast traditional heavy metal fans. But if you want music that envelops you, tells a tale on cinematic proportions and can take you away from reality to the fantasy world the creators are portraying then this album is for you.