Riding the crest of the British sludge, doom and stoner wave are Oxfords own Desert Storm. Having just completed a country wide tour, they are set to release their latest album 'Omens' this week and had COVID-19 not intervened they would have played Desertfest as part of a wide European tour! So whilst locked down we caught up with drummer Elliot to see how things were going.

The Razor’s Edge: So first things first, how are you guys coping with the current situation?

Elliot: Not too bad thanks. I’m starting to get little bored now though. I have been trying to keep busy by writing music and cooking etc. I think it is good to try and get into some sort of routine really, although there has been a number of occasions when I have found myself sleeping in until midday. Sometimes I just lay there and can’t help but think I have nothing to get up for, so I become lazy. I am currently furloughed, like the large majority of people across the country.

The Razor’s Edge: With an album due out I assume you’d planned to tour off the back of it. Are all touring plans on hold right now?

Elliot: Yes we were scheduled to do a three week European Tour from 1st May, but unfortunately that was cancelled as expected. One of the good things about being off work is it has given me and Ryan (Guitar) plenty of time to work on rescheduling the tour to October. Pretty much most of the dates are in place now and hopefully we will be able to get back out on the road again by then in support of our new album.

The Razor’s Edge: And whilst we are talking about touring, it seems like a life time ago now, but back in February we caught you on tour with Raging Speedhorn. What’s it like being on the road with those guys? 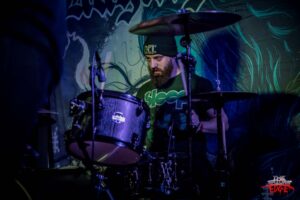 Elliot: Oh cool. Yeah that was a great UK tour. It was really nice doing it for independent music week. The Speedhorn guys were great too. We’ve played shows with them a few times over the years so knew them reasonably well. They always put on a very energetic and killer live show. We all had fun watching them smash it each night. The only bad thing about that tour was pretty much all of us got ill. There was a nasty bug going around… I won’t go into too much detail about it though! Luckily it didn’t stop us from giving 100% each night on stage though.

The Razor’s Edge: I seem to remember a photo on social media of the contents of your stomach all over the van one evening!? Haha!

Elliot: Yeah… and that wasn’t from booze unfortunately. I remember thinking it was at first as I’d got through a fair bit of Whiskey, Vodka and Jager Bombs that night, but by the time we arrived at the hotel it was a lot worse. Cleaning that van was not pleasant! haha

The Razor’s Edge: On that tour, you also pulled double duty one day playing both Manchester (APF Showcase) and Sheffield (Raging Speedhorn tour). How much effort was that for you guys to pull off?

Elliot: Yeah I remember being worried about that at the start of the day… me and my brother Ryan also played in our other band at the APF Showcase too, so we had to do 3 sets! But to be honest, it was a lot easier than I thought it would be. Maybe the tour was making me fitter by playing each night.

The Razor’s Edge: I guess there was also some kind of loyalty involved to support the labels showcase event too?

Elliot: Yeah absolutely. We were originally confirmed to do the showcase months before we got asked to do the Raging Speedhorn tour. We didn’t want to let Fieldy down though as he does so much for our band. We spoke with him and it was decided that we could play early afternoon and have time to drive to Sheffield after.

The Razor’s Edge: What’s it like having a guy like Andrew Field putting his faith in you?

Elliot: It is great. We couldn’t ask for a better guy to put out our records. It’s hard to find trustworthy people in the music industry. It’s a well-known fact, so having someone like Andrew who believes in the band as much as we do is kind of a blessing really. There isn’t enough people like him about unfortunately.

The Razor’s Edge: So now we have the new album, due to drop on Friday. I’ve always described you as the band ready to take over from Orange Goblin. But ‘Omens’ is not stoner rock…. from my perspective, a lot heavier than ‘Sentinals’ which in turn was a lot heavier than you previous albums. Have you intentionally moved in a heavier direction the past few years?

Elliot: I think we’ve always been a band that is willing to experiment and try new things. We love the groovy Orange Goblin style sound, however we are currently enjoying exploring more progressive and sludgy territories as a band. I think the new direction suits Matt’s voice better personally too. He has a wide range on him as a singer and is very versatile which makes it easier for us when writing the music to the songs. However this isn’t to say we will never go back to our more bluesy sound again.

The Razor’s Edge: How did you approach writing ‘Omens’ compared to previous albums?

Elliot: From the start of the writing sessions, we knew we wanted to take it in a heavier and more progressive direction. To achieve this, we started by tuning lower on most of the songs. ‘Black Bile’ and ‘The Machine’ were in drop G. As for approaching the more proggy elements, Chris White started playing around with the piano. You can hear this in the m8 section to ‘Pain, Grief and Suffering’ where it almost takes on a slight Pink Floyd/Tangerine Dream vibe. The main difference with this album compared to most of the others was having backing vocals. Chris White and Matt played around with a lot of harmonies over different sections of different songs and it turned out sounding great. Their voices worked really well together and helped to really thicken up the sound.

The Razor’s Edge: One noticeable element over the years is the growth in stature and confidence of Matt’s vocals. At times on ‘Omens’ he narrates rather than growls, acting as the story teller. Where did the idea for this change in perspective come from?

Elliot: Yeah Matt did a brilliant job with the spoken word sections. I think I initially suggested him trying it in the middle section to ‘Vengeful Gods’ and he had the opening track ‘Omens’ already worked out as a spoken word too. It’s cool and it’s a bit different. Without trying to blow smoke up his ass too much, he is a great lyricist, and whereas most lyricists write about personal experiences or politics etc, Matt has pretty much always gone for a different approach. He tends to write more like stories. He has a pretty vivid imagination. If you delve into our back catalogue you can find that songs such as ‘Enslaved in the Icy Tundra’, ‘Horizon’ and ‘Sway of the Tides’ all follow the same story. So I think the idea of storytelling has always kind of been in our songs, but maybe it is just more prominent now. All the lyrics for our new album will be up on our bandcamp page.

The Razor’s Edge: Let's talk about the artwork for Omen’s, visually stunning. What is the concept here?

Elliot: Yeah we love it. Mattias Frisk is a fantastic artist. He also did ‘Sentinels’ for us. We wrote to him asking if he would be interested in working with us again, and when he agreed we fired over a load of ideas for the brief. They were basically based on the lyrical content of the album - which happened to be quite morbid as they were pretty much mostly about death and the plague etc. Mattias originally came back to us with an idea which had a coffin placed where the key is. We felt having a key in the centre gave a bit more enigma to the design.

The Razor’s Edge: What was the process like to create it, did you go to the artwork with a ready made concept? How much free rein did they have in creating that beast?

Elliot: When we approached Mattias, we always said we wanted him to have a free rein with it as much as possible. We weren’t too controlling, as long as it related to the concept of the lyrics.

The Razor’s Edge: Wo where next for Desert Storm? Where do you go from here?

Elliot: Well I think the next step for the band is getting out to tour the record in October, Fingers crossed! As for after the tours… I’m not sure there will be another album for quite a while as it is so expensive to keep making them. That however, is not to say that there won’t be any new music from us in the future!

Stay safe and hope to see you at a gig soon!

ICYMI - you can check out our review of Desert Storm's latest E.P. here. 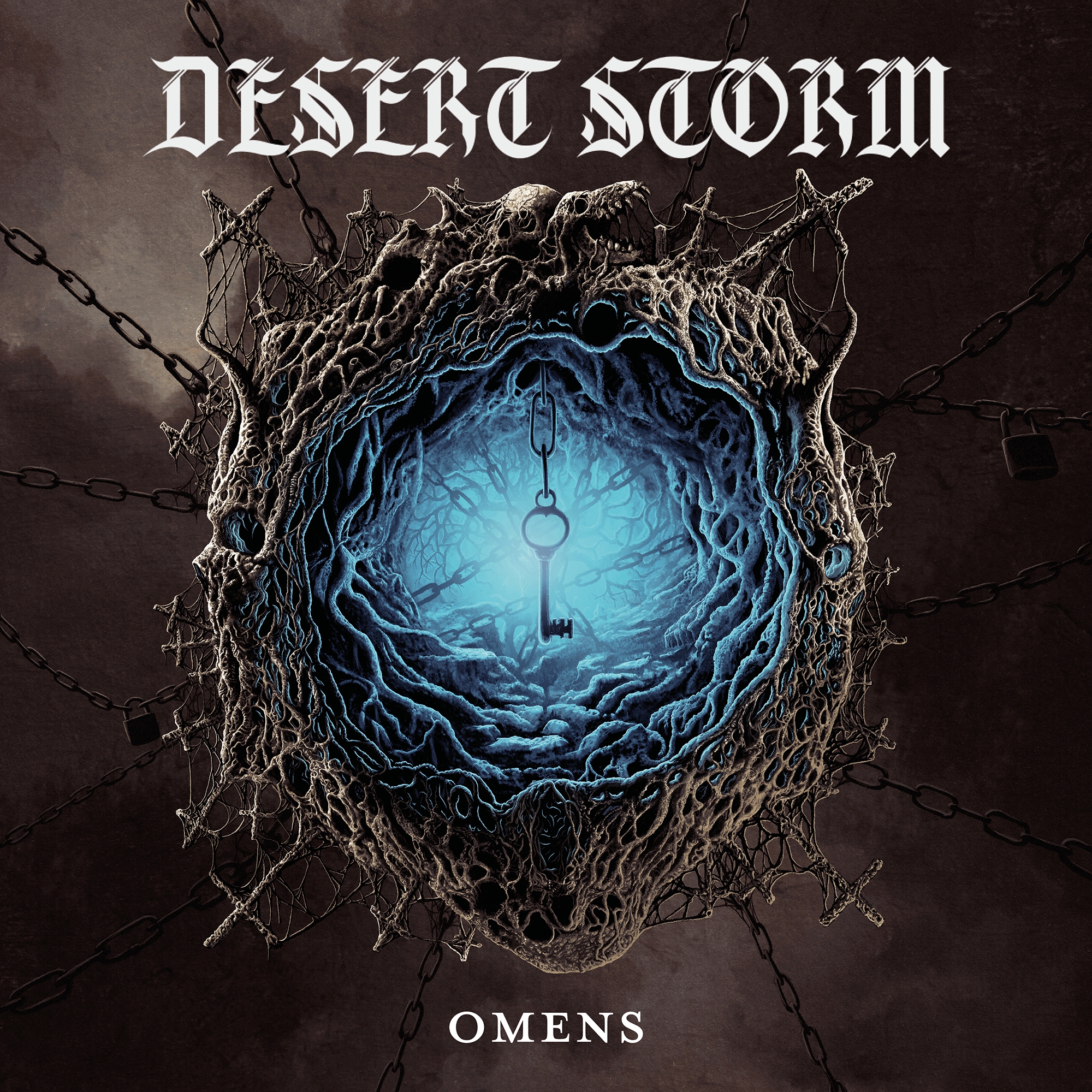