Lamb of God are one of those bands…. you either love them or you hate them. It seems there is no in between, no middle ground and the two camps are firmly entrenched in their opinions. In heavy music circles the love them camp seems to far outweigh the hate them camp, the latter of which does seem to include a mostly ageing population. So can their 8th studio album win over the haters?

‘Lamb of God’ the self titled album has been five years in the making, delayed yet further by COVID-19 but finally seeing it’s release this June. The opening salvo is not the battering ram of sound you might expect. Instead we are greeted by the spoken word of Randy Blythe, taking our hand and walking us into the behemoth that is about to come. Album opener ‘Memento Mori’ a slow burner, building throughout. 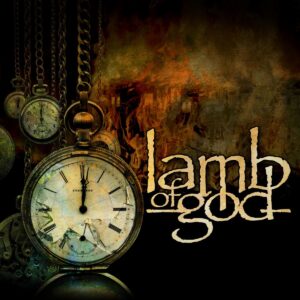 ‘Checkmate’ gives the impression of a song recorded live in the studio. Art Cruz’s count in and stick tap leads us to the guitar solo intro, wonderfully worked and very catchy. The fast paced number will have the listener playing air drums along. This is Art’s first outing on the drum stool for Lamb of God, having watched him grow through his time with Winds of Plague and Prong. His talent being used to its full potential on this album, he has a different style from former drummer Chris Adler but it’s perfectly suited to the bands overall sound.

Standout on the album is ‘Reality Bath’ with its colossal hooks it has the listener banging his (or her) head and with it the anthemic chorus this is destined to be a staple of the bands live performances for years to come. ‘New Colossal Hate’ follows perfectly on with the theme of both songs flowing into each other, the latter including a number of unique tempo changes giving it a feel of older Lamb of God material.

Jamey Jasta (Hatebreed) makes a guest appearance on the vocals of ‘Poison Dream’ duelling for supremacy with Randy throughout the song. The dual vocal style really suiting the band and whilst this will never be a permanent move, it certainly keeps the momentum of the album moving along at high pace. Chuck Billy (Testament) then steps up to the plate, providing vocals for ‘Routes’ this number almost the odd one out on the recording. Not a bad song, far from it, it mirrors classic Testament tunes with it’s thrash foundations and majestic soloing but it feels out of place, not really going with the flow of the overall record. A good number that would be suited more to a Testament record than it is to this one.

Lamb of God have gone up a gear with their self titled album, it’s an all rounder, perfectly written and performed. One that will please the LoG faithful but also has the chance to win over the haters, should they give it the time to sink in. A career defining piece of music, setting the band up to be leaders of the heavy genre for years to come.