They’ve been raising a shit storm in the East Midlands for the past three years and have already released a live bootleg which features the songs here, but it’s always good to have a debut full-length to release. At 25 minutes in length, Derby blackened thrashers Devastator’s debut isn’t a noodling progressive effort but don’t confuse quantity with quality. This is a snarling, raw and gnarly old school blood covered offering laid at the altar of the gods of Venom, Sodom, Motörhead, Hellhammer and Slayer. 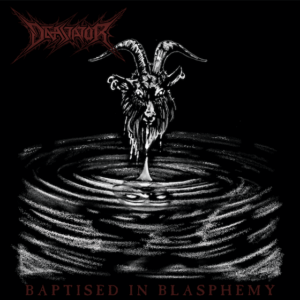 What Devastator do well is to combine the aggressive punk style of those early extreme metal outfits with the driving power of Slayer and Motörhead. Opener ‘Howling Night’ leaves you with no questions. It’s raw, violent, explosive and every inch a track that Venom would have been proud to call their own. Tighter than the hangman’s noose, the duel guitars add volume to the band’s speed approach, with the gruesome vocals of bassist Tom Collins on the mark. Collins links with drummer Jack Scarlett to provide a powerful engine room that gives not one inch. ‘Worship the Goat’ spews forth like bile from Satan’s guts, an explosive thrash beast which rages with the best of them.

The old school production adds authenticity to the album, polished enough to make it listenable but still with a 1980s feel which provides the framework for the album.

Seven tracks in total, all ragers and all ferocious. After the punishing intro of ‘Howling Night’ and ‘Worship The Goat’, the pace is maintained with two searingly fast and gruesomely potent tracks at the midpoint. ‘Send Them to Hell’ and ‘Death Slut’ blend into one swirling, roaring tempest of thrashing anarchy. Devastator’s writing is solid, with the duel guitar work on ‘Hail Death’ and ‘Spiritual Warfare’ providing opportunity for some welcome duel guitar harmonies. ‘Baptised in Blasphemy’ is an album that should be appreciated by not only those who yearn for the old days but for those that appreciate their metal.

ICYMI - Check out our interview with Devastator here.