There have been many surveys in recent years which have noted the similarity in both relationship and membership of fans of heavy metal and classical music. Filmed in the beautiful Metropolitan Theater, Mexico City in February 2019, Greek symphonic death metal titans Septicflesh provide a masterclass in how to deliver in one of the most majestic and commanding performances and demonstrate that all those surveys are indeed accurate.

Recorded for DVD and Blue Ray, the Athenians are backed by over 100 musicians from the Symphonic Experience Orchestra, the Enharmonia Vocalis Choir and the National University of Mexico Children’s and Youth Choir. It’s a production on a massive scale but it is absolutely breath taking in both audio and visual finish.

If you’ve ever seen Septicflesh live, you’ll know that the band don’t do ordinary. Each show is a spectacle, their sound enormous and their mere stage presence immense. This performance is something else though. The band are on inspired form, led by the predator armoured Spiros ‘Seth Siro Anton’ Antoniou who roars and encourages the band, crowd and orchestra through an incredible setlist. 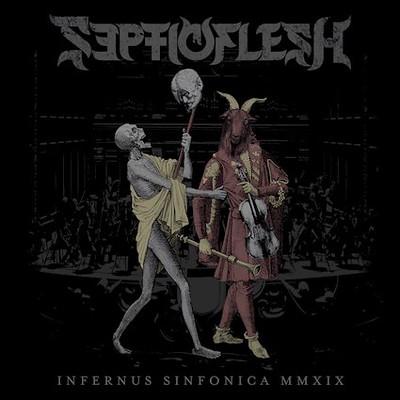 A spine-tingling intro sees the capacity crowd already rising to their feet as Septicflesh arrive on stage and launch into a massive version of ‘Portrait of a Headless Man’. Over the next 80 minutes the Greeks lay waste with a blistering show that is lifted into the stratosphere by the combination of the orchestral and choral backing. The interplay between the classical and death metal elements hit an incredible peak early in the show, with a ferocious ‘The Enemy of Truth’, Seth demanding that the crowd show “their devil horns”, the soaring vocals of the choir enchanting as the track concludes. There is no other band whose music matches this so completely.

Whilst the crowd are losing their shit throughout the gig, it’s fabulous to watch the furtive glances from the orchestra members, clad in their finest evening attire, towards the crowd as they slowly become more immersed in the carnage that is unfolding. By the end they are flashing their own horns to the masses. ‘Communion’ levels the venue, the powerhouse drumming of Kerim ‘Krimh’ Lechner harmonising with the choir.

Each track on this release builds dramatically, the tension, atmosphere and emotion crackling. Supported by a perfectly pitched lightshow, Seth and guitarists Sotiris Vayenas and Christos Antoniou prowl the front of the stage, banging their heads in unison as each section increases in intensity. ‘Dogma of Prometheus’ is a perfect example, battering heaviness makes way for flute, choral harmonies and sweeping string sections before more epic drama is delivered.

Utlising the Children’s and Youth Choir is an inspired decision, their input on ‘Prototype’ providing a further dimension to an already massive song. Other highlights on this release include the punishingly heavy ‘Dante’s Inferno’, the mass audience participation on Anubis and the incredible harp intro to the climatic ‘Dark Art’. But, the whole event and recording is one enormous highlight which flags up again that 30 years into their career, Septicflesh

remain as vital and original today as they haver ever been. This is a release that should be in your collection. Period.

‘Infernus Sinfonica MMXIX’ is released by Seasons of Mist on 31st July.