Ok, so this was a tough one for us here at The Razor's Edge, the global pandemic has decimated the live music industry and since March gigs have become a thing of the past. We considered whether we should run this feature this year, but at the end of the day we want to celebrate live music. There were gigs for the first three months of 2020 and since then a plethora of bands have been putting on live shows via streaming services.

So with that in mind some of The Razor's Edge staff have put forward their offerings for gig of the year!

Well the year started out so well, the Terrorvision and Those Damn Crows tours in January and February were such fun, Raging Speedhorn on their independent music venues tour were outstanding and the Metal 2 The Masses heats in Wolverhampton threw up some wonderful new bands.

But overall, no one could match the Bay Strikes Back tour featuring Testament, Exodus and Death Angel. Whilst Testament were their usual flawless selves and Exodus destroyed the Academy in Manchester they were both upstaged by tour openers Death Angel who shone through. Little did I know back then it would be my last gig of the year, but all things considered, it would probably have still topped my list even if we'd had a full year of gigs!

Despite the shit show of a year we've had, before the pandemic hit I still managed to attend thirteen live shows and the HRH Metal festival. So I had plenty to chose from. Up for consideration were the shows from Terrorvision at KK's Steel Mill in Wolverhampton - a band who never fail to put on a great show and then the Bay Strikes Back tour featuring Testament, Exodus and a show stealing Death Angel!

However for me, there was no doubt, seeing Raging Speedhorn (with support from Desert Storm) in a tiny venue above a record shop in Sheffield was simply stunning. The small venue upped the intensity of an already gnarly band and the show was simply stunning. That February 1st live show seems a lifetime ago now, but what a highlight of the year it was!

Gig of the Year: The Wildhearts – The Ritz, Manchester

Slim pickings for live shows this year, I’m afraid - but regardless of the quantity, feel the quality. This was my seventh Wildhearts show in eighteen months, even more than I managed during the band’s early nineties hey-day.

Having returned with a killer album last year and a supplementary EP in the autumn, The Wildhearts were riding something of a crest of a wave. The critical acclaim of The Renaissance Men and Diagnosis was reaching that previously felt on the classic debut Earth vs… and the live shows showed the band were far from their own tribute act.

Support came in the shape of CKY and the Backyard Babies but Ginger and co. weren’t about to surrender the momentum and played a blinder to a packed Ritz. Mixing classics like Everlone, Vanilla Radio, TV Tan, etc with newbies like Dislocated, Let ‘Em Go and Diagnosis demonstrated The Wildhearts’ future is a rosy as its past and it was good to see the band switching the setlist from the tour back in May 2109 and the Bloodstock performance in August.

It is great to see the Big-Three UK bands from the early nineties coming back to thunderous applause. Terrorvision are still a blast and Therapy? still irresistible, but The Wildhearts were always the soundtrack to my early twenties.

And, let’s face it: what else are you going to do on a dark and cold January Friday? 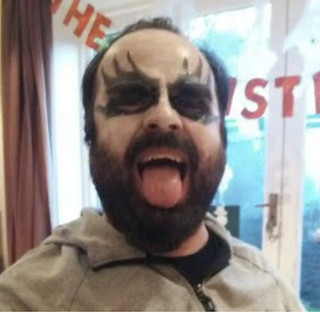 Gig of the Year: Slipknot - The O2 Arena, London

Travelators, fire, masks , swearing, six circle pits at the same time and 20,000 people in one room. My only gig this year was Slipknot at the O2 Arena in London. A great show where the event is equal par with the music. Both sonically and visually, the Iowa band where on point. A slick show that felt like staged chaos. Safe but thrilling and London loves this band. 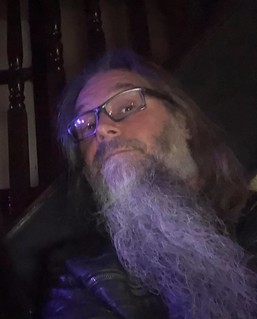 The question of best 2020 gig has me examining a stark list of contenders. Although it would have had to be a special gig to beat the eventual winner into submission.
Back in January I attended the APF Showcase at the Bread Shed in Manchester. I witnessed incredible performances from bands who I was already a fan of, mixed with several surprises on the day. I can now add more bands to my favourite list and more t-shirts to my collection.
As well as a great intimate festival venue and happy northern fans, a genuine love was displayed by the bands towards the label they are signed to. All these things combined with excellent music can only lead to a winning day. The next will not be in January next year, but when ever it is I will be there once again. 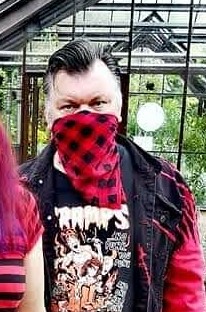 As I only got to two bands this year both are right up there. Firstly, Twin Temple at the Deaf Institute in Manchester. Satanic doo-wop, absolutely fantastic. Satanic rituals, the crowd anointed with blood, great songs by great musicians.

Then the Bay Strikes Back tour with Testament, Exodus and Death Angel. A great night of classic thrash. For me Exodus was the best on the night but they always have been my favourite thrash band. Death Angel were awesome and Testament were great, but for me personally the lesser of the three. 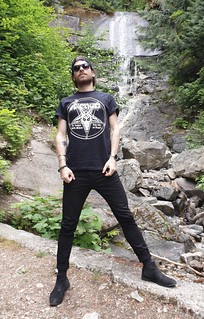 This show was on Valentine’s Day and I can think of no better way of spending Valentine’s Day with my partner than at a sold out Babymetal show in Berlin. Have I always been a Babymetal fan? Certainly not. When I heard ‘Gimme Chocolate’ for the first time, I frowned and crossed my arms thinking “what are these three dancing kids doing in my true and pure metal scene?”. Many true metal warriors did the same. It took some years, but I slowly uncrossed my arms and I bought a first-class ticket and hopped onboard the Babymetal train. Why? Because they are fun, talented and fucking heavy. Surrounded by people from all countries of the world, young and old, battlevests and Mayhem shirts I witnessed this Heavy Metal phenomenon for the first time and I was left speechless. They put on a hell of a show! The crowd participation was insane (even though they mainly sing in their native Japanese) and the energy was turned up to 11 throughout the whole show. I’d go see Babymetal play every day of the year if I could. 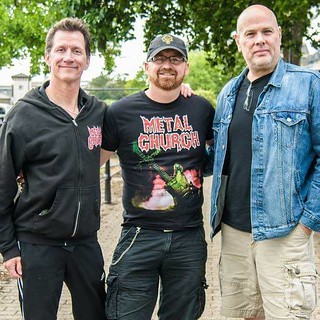 Gig of the Year: Anathema – The Palladium, London

It seems ironic that my gig of the year was what turned out to be the final UK performance for the foreseeable future for the Liverpool band. Celebrating the 10th anniversary of ‘We’re Here Because We’re Here’, it was an honour to be at this iconic venue to see probably the best performance I’ve ever seen by Anathema. Over two hours of atmospheric emotional music, which included the album played in full, Anathema were relaxed yet totally on the ball from the start. If this is to be their swansong, it was one to treasure.

With the world as we know it coming to an end in March and all live performances from thereon cancelled for the foreseeable future there wasn’t really much choice to go from when it came to the best live performance of the year but thankfully the few I did get to see were some cracking shows. This performance from Testament, Exodus and Death Angel had to take the crown though. Being a thrash metal maniac I would be thrilled to see any one of these bands but to have them all on one bill was more than exciting it made me absolutely ecstatic as well as everyone else in the Bristol O2 that evening. Every single band was on fire and each performed like they were the headlining act which fed the rabid thrash hungry audience meaning that there was absolute carnage on the floor with swathes of bodies slamming and surging. It has been a long time since we had a thrash tour like this hit the UK and hopefully when the coronavirus shit show finally comes to an end we can see more tours of this calibre hit our towns and cities once again. 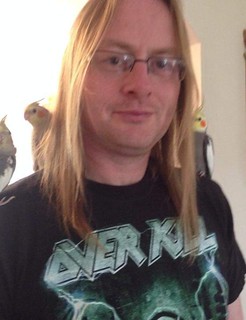 Such as it is, the only gig I managed this year was Slipknot at the Birmingham Arena with the wife. It seems like forever ago now. But I do remember it quite well. Unfortunately, due to a misunderstanding about where the tickets were, (left back in the hotel in the suitcase) and I take full responsibility for the mistake, we missed the majority of support act Behemoth, an unusual pairing some might think, and although I don't consider myself a fan, the sound and stage show were very impressive and full respect to Slipknot, many headliners wouldn't allow the support act that much courtesy). The few songs we did see, they were excellent. Including a bizarre, yet strangely captivating drum outro, with every member coming back on stage with their own drum!
Slipknot themselves seemed delighted in being at the "home of metal", as Corey let us know, and put on a fantastic set. Love or hate them, they certainly know how to put a show on. The band has so much energy and new member "Tortilla Man" was all over the place from start to finish. My only bad memory, was from a number of 'macho' idiots trying to start pits, with no consideration to others. That was only a slight taint on the evening, and no fault of the bands. A great night, even if the missus did slightly over do the cocktails later and spent the whole train journey back the next day, green as the Incredible Hulk! If you've never seen the 'Knot,  it's worth checking them out, even if you're not a fan, just for sheer entertainment. 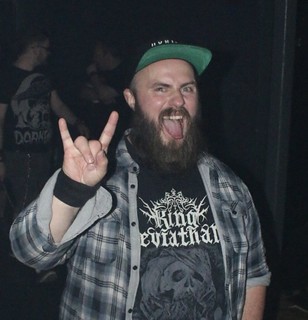 The only gig I managed to attend this year was HRH Metal at the O2 Academy, Birmingham in February. Talk about taking things for granted. I really wasn't feeling it on the way to the venue and my anxiety was giving me a beating, but there were some great bands playing. In between catching up with friends (for the last time for 2020) I caught great shows from the likes of Helgrind, Lullaby For A Unicorn, Raised By Owls, Kyrbgrinder, Enquire Within, Evil Scarecrow, Valafar, Mage and Rhapsody Of Fire. In hindsight, had I known that would have been my last gig I would have cherished every second of every band and would have made sure I saw every person I knew that was in the building. 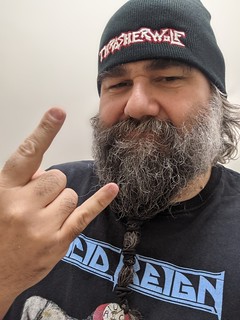 I've only been to three gigs this year, Grand Magus and Evil Scarecrow, both at The Dome, Tuffnel Park, being the others.