Lamb of God are often seen as a bit of a “marmite” band, you either love them and hate them. There are of course the old guard, those older fans, those stuck in 1986, who dismissed them without giving them a chance. And then there are the new generation of metal heads, who worship the ground that Randy et al. walk upon!

Last year the band dropped a new album, the self-titled ‘Lamb of God’, to critical acclaim and shortly there after embarked on a series of live streams to get the fans whipped into a frenzy despite the lack of real live shows. For those of you who watched those live streams, you know what comes next! 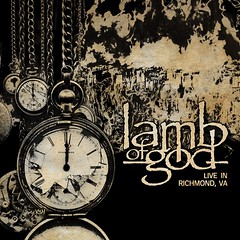 Taken from those live streams is the next Lamb of God offering, ‘Live in Richmond, VA’, featuring the set in which the band played their new album in its entirety and an encore of four songs including ‘Ruin’, ‘Contractor’, ‘512’, and the debut live performance of ‘The Death Of Us," a new song the band wrote and recorded in quarantine for the Bill & Ted Face The Music movie and soundtrack.

Whilst is it a live album in the sense that it is a recorded live performance, it is of course missing one vital factor… the fans. As the band roll through ‘Memento Mori’ and ‘Checkmate’ the feel of music being performed live seeps through your speakers, yet the lack of fan reaction is evident and makes you yearn even more for the return of live shows.

As the recording continues the intensity ramps up, song by song the new album is run through; Art Cruz pummelling his drumkit like his life depended on it as Randy cries out in terror. It’s live music perfection and a sight/sound to behold. I often judge an album by how much air drumming I do as I listen along and with that in mind I can safely say this release ranks up there as one of the best of the year. Thanks to my air drumming this review took six times longer than it should have to write!

With ‘Live in Richmond, VA’ Lamb Of God prove just what a driving force they are in the metal music scene today. It’s time for the doubters of that old guard to move over! Are your opinions even relevant anymore?

Lamb of God release 'Live in Richmond, VA' on CD and DVD via Nuclear Blast Records on March 26th.