Before you can say ‘métal noire’, Seth has already lit the fire engulfing the world in flames with ‘La Morsure du Christ’. The instantaneous brute force and satanic wrath being spewed out from my speakers brings me back to the opening of Darkthrone’s ‘Panzerfaust’. Although many albums since have certainly had a similar explosive takeoff, the title track “La Morsure du Christ” (the bite of Christ) immediately sinks its teeth in you. Ever since their 1998 full-length debut ‘Les Blessures de L’Ame’, Seth has been a cornerstone in French black metal. Despite a significant and blasphemous catalogue - ‘La Morsure du Christ’ can be seen as a sequel to the debut, not only in style and the reintroduction of their native tongue, but also because of the third addition to the ‘Hymne au Vampire’ opus.

How much more black metal could this be? The answer is none. None more black metal. The commanding album art depicting the blazing inferno of the Notre-Dame de Paris which shook the world in 2019, conveys the very essence of the band and ‘La Morsure du Christ’ alike. As do the remnants of the cathedral, the album works as a symbol for a godless world and the ultimate triumph of Lucifer. It’s quintessential black metal in its truest and purest form. 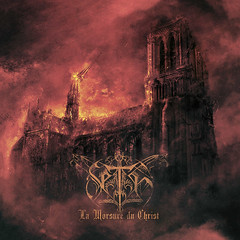 Seth is certainly not only all about shock value - their history and faultless musicianship proves the potency of the band. Each song puts you centre stage in the flaming purgatory portrayed on the album cover and the french lyrics accent the ominous omen throughout the record. As the song ‘Métal Noire’ manifests, this album is no nonsense black metal. However, the rapid tremolo picking and breakneck blast beats are intertwined with familiar acoustic guitar parts, choir chants and hair-raising grooves. The latter is particularly prominent on the song ‘Sacrifice de Sang’.The eerie blasphemous anthem ‘Ex-Cathedral’ stands out by including a diverse palette of extreme and calm moments, which again showcases Seth’s ability to rein in and release the vicious beast that is black metal. As mentioned above, on this album we find the third part of the ‘Hymne au Vampire’ saga which they started on their inaugural offering ‘Les Blessures de L’Ame’. For Seth diehards this is pretty remarkable as we have been waiting over twenty years for it and ‘Hymne au Vampire (Acte III)’ was well worth the wait. As the demise of the historic landmark depicted on the album cover symbolises the end of Christian reign, the closing track ‘Le Triomphe de Lucifer’ puts the final nail in the cross. The dark energy in the song is tangible and Saint Vincent’s forceful roar shatters the wall of sound tauntingly culminating in a classical organ symphony. Hair and horn-raising moment indeed.

The intensity of the music and message throughout delivers an incredibly elevated black metal pièce de résistance. ‘La Morsure du Christ’ is a sacrilegious monument taking the listener on a haunting musical journey full of elegant details.

Out via Season of Mist May 7th (which marks the 2nd anniversary of the event depicted on the cover).