I’ll be honest, it was only a lucky dip that even brought this E.P. into the crosshairs. I knew who Lovebites were, but I’d tragically dismissed them as being in the same bracket as Babymetal. Whoa. I was wrong. This is a glorious E.P. and the only thing that I’m regretting is not checking them out four years ago when they first broke on the scene.

Lovebites is bassist Miho, bandleader and backing vocalist, drummer Haruna, guitarists Midori and Miyako and vocalist Asami. They’ve released three full-length albums as well as a couple of E.P.s. This release features their first theme song from anime along with four other tracks, all recorded during the pandemic. 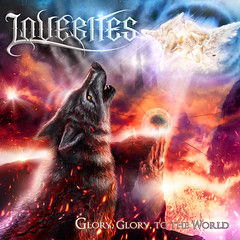 Being partial to a bit of quality power metal, Lovebites tick all the right boxes. The title track begins with a symphonic overture, building tension and atmosphere before exploding into a magnificently bombastic and riotous six-minutes of pulsating metal. There is shredding galore, the drumming is insane and locks on with the rampaging bass lines. And then there is Asami’s soaring vocals. Mixed with some keyboard samples, this is something most male power metal bands merely dream about achieving.

The riffs intensify on ‘No Time to Hesitate’. A blistering fiery track that lowers the octaves and batters. This is ferocious stuff and played superbly. There is a hook that catches deep, melody galore but under all this a desire to play fast and heavy. I’m refraining from comparisons at this stage as there are few power metal bands that could match this display.

It was halfway through the E.P. when I thought I’d have a quick search on YouTube. I knew the band had played the main stage at BOA in 2018, changing to accommodate Suicidal Tendencies late arrival (if memory serves). I knew that the five ladies eschewed black in favour of some sweeping dresses, but image means nothing if you can’t play. And these girls can play alright.

Back to track three, ‘Paranoia’. Another punishingly fast track, utilising slightly more symphonic elements but retaining that crushing power. The classical touches enhance rather than distract and listening carefully reveals just how technically gifted this band is. The guitar work is at times subtle, at other times ripping a hole in the face.

‘Dystopia Symphony’ is next up and it’s probably my least favourite on the E.P., incorporating as it does some recognisable movements within the six-minute rampage. It may be one which is just a little too brash. And that leaves ‘Winds of Transylvania’, the song that is the theme to vampiric anime ‘Vladlove’. I have no real understanding of what anime is but the song itself is full of atmosphere, passion, and more ballistic heads down frenetic shredding.

At times, Lovebites are a little too manic. Their incredible pace matches anything in the genre and my only complaint is that it may be a little too one dimensional on occasion. I have no reference point but suspect that this 110mph tempo is the norm. After this E.P., I will start to seek out a bit more of a very entertaining and exciting band.