Every so often, an album hits your list which blows cobwebs away with its refreshing approach. Combining a classic mix of Opeth, Tool, Rush and Soundgarden with maybe a dash of Rage Against the Machine, Ontario based The Wring’s new record is just such a release.

The band is the project of guitarist Don Dewulf, who began to develop it in 2015 with a large compilation of demos he wanted to explore further. A self-titled debut was released in 2017 before Mark I dissolved. A chance conversation with Opeth frontman Mikael Akerfeldt reinvigorated him, and he reconnected with bassist Jason Hendrie for another shot. 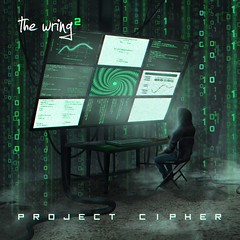 It’s that fresh approach, with the unexpected direction and feel that makes this album so exciting. ‘Sorceress’ for example, weaves its spell from the opening riffs, the musicians in harmony and complete synergy as they feel and manoeuvre their way through the song. The vocals on Bonilla work perfectly with the music, his rich style warm against the heavy yet melodic riffs. The instrumental ‘Cipher’ allows all to express themselves, with Beller’s explosive bass one of many highlights.

Dewulf’s guitar work shines throughout, at times reminiscent of Alex Lifeson in his prime, such as his powerful solo on ‘Steelier’ which soars above the raging musical maelstrom below. There’s even a funk-infused breakout on ‘Dose’, which is infectious with its driving hook.

It’s an absorbing record, one that takes time to soak in, but several plays ensure that it’s burnt deep into the memory. When those end of year lists come round, ‘Wring² Project Cipher’ is likely to be pushing for a slot.