Album Review: At The Gates - The Nightmare Of Being
Reviewed by CJ Claesson

If you’re hearing the pummeling drums and distorted riffing just by reading that, then At The Gates probably are close to heart. Swedish death metal royalty and pioneers of the true and tested ‘Gothenburg sound’, which any death metal fan worthy of the patches on their beer-drenched battle jacket will easily recognise from a mile away. With fans having the fist-raising line ‘As we drink from the night itself!’ from the 2018 release still ringing in their ears, At The Gates set out to unleash another Swedish melo-death assault. ‘The Nightmare of Being’ marks the seventh full-length album by the ever inflamed Swedes. But it’s not business as usual...

In 1995, At The Gates released the mother of melodic death metal albums, did a mic drop and locked up the gates indefinitely. The neck breaking riffs on the revolutionary album ‘Slaughter Of The Soul’ might just have been the last pieces of buzz saw metal ever produced by the band - and that would’ve honestly been fine. I mean, can you beat perfection? Swiftly dissolving as a band after setting a new benchmark for a whole genre is a true power move and it arguably only made their reputation and influence grow. At The Gates spawned the birth of countless bands following their tank-like rampage, but in 2008 it was time for papa bear to take centre stage again. After a string of reunion shows the band released ‘At War With Reality’ - their first studio album in almost twenty years. Fast forward to the pandemic-ridden year of 2021 and the aptly named, brand-spanking new album ‘The Nightmare Of Being’ is unveiled. One thing is for sure, the Swedes added some weapons to their heavy metal arsenal. 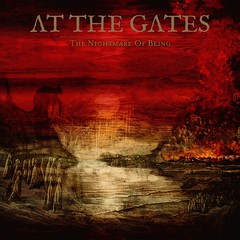 Every time I listen to a new album that I’m about to review, I make sure to take notes. Here’s a sample from this album: “‘The Abstract Enthroned’ - fucking banger”. Even though the album overall is an explorative journey into new creative heights, riddled with pessimist philosophy and progressive invention, it’s still a concentrated metal punch to the gut. While acknowledging their musical progression ‘The Nightmare Of Being’ is still quintessential At The Gates and nobody is happier than me. Experiment, conceptualise and add as many saxophone parts as you like - as long as the foundation is intact, I’ll support you forever. As opposed to previous releases and most recently ‘To Drink From The Night Itself’ which overall is a more straight-forward, audibly violent record - ‘The Nightmare Of Being’ is a wide-eyed hunger for the new, while not veering off the familiar road of extreme metal brutality. This is a band which after 30 years are still moving forward and combatively pushing preconceived notions of what they should be to the side. Already in the opening track ‘Spectre Of Extinction’ At The Gates flex their pickled herring infused muscles. Masterfully presenting a plethora of melody and intimate emotion wrapped in their brand of frantic riffing, intertwined with open chord grandeur, topped off with the anguished vocals of Tomas Lindberg. Yum!

We’re presented with a very polished record with meticulous attention to detail. Pure headbang anthems like ‘The Paradox’ are followed by more complex arrangements like the title track where the intimate darkness of the record becomes more apparent. The talk of the town is of course ‘Garden of Cyrus’ where instead of modestly sketching with progressive colours, they decided to throw a whole bucket of paint on the canvas. Do brass instruments have a place in death metal? Call me old fashioned - but, nope. However, the brief introduction of sax won’t harm my overall take on the song or the album. It’s there and let’s just leave it at that.

Chaos ensues yet again in the second part of the record after the haunting intro to ‘Touched By The White Hands Of Death’ - taking the sound back to the ‘At War With Reality’ era. The record is full of surprises ranging from compelling arrangements to sudden turns which brings us to ‘The Fall Into Time’ which I described as “super prog” in my notes. Trying to decipher the song couldn’t ever do it justice. It has to be experienced. Preferably in complete darkness. At The Gates showcases their explorative pilgrimage by presenting songs which nobody really expects from them - which makes me love them and the record even more. Throwing in a ‘Cosmic Pessimism’ or a ‘Cult of Salvation’ on either one of the most recent releases wouldn’t have landed the same way as they do on ‘The Nightmare Of Being’. The intense push and pull from the diversity of the songs creates somewhat of an intimacy which hasn’t been as prevalent on other releases. Even though some of the songs from the album will end up on a well-curated playlist in my library, the record should be listened to as a whole. The concept runs so deep creating a sonically dark cave and At The Gates are not handing out any headlamps. It might seem like there’s light at the end of the tunnel, but the last track ‘Eternal Winter of Reason’ is only a mirage of salvation - ultimately hurdling you further into the depths of the sweat dripping nightmare created by the ferocity of Sweden’s finest.

At The Gates keep climbing higher for every release. Whether or not you have the energy to join them on death metal Mount Everest is up to you, but it’s a beautiful view up here. ‘The Nightmare Of Being’ is far from instantaneous primitive circle pit madness. It’s a challenge for all of your senses but it never stops to fascinate. Listen to it five times and you’ll be stuck forever… ‘The Nightmare Of Being’ - fucking banger. Last thing: that album cover, though? Next level.

‘The Nightmare Of Being’ out via Century Media Records July 2nd.