Every now and then I hear an album from an unknown band and I think to myself why on earth haven’t I heard these before? That is very much the case with Craven Idol and their new album Forked Tongues. Craven Idol are a blackened thrash metal band from London who formed in 2005 and released an EP and two albums with Forked Tongues being the third full length from the band. 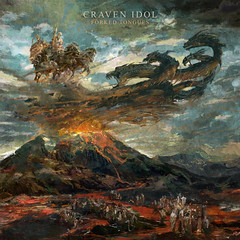 Right from the very start this album rips your head off and sets fire to your headless corpse. Album opener Venomous Rites swings for the neck with a devastating combo of savage riffs, relentless drumming and deranged vocals and it really does not let up from there. Craven Idol have managed to combine the best elements of thrash metal and black metal and mixed them together so that the two genres compliment each other entirely rather than smashing them together and seeing what fits. There are also elements from death metal and traditional heavy metal that rear their heads every now and then. Songs such as The Wrath Of Typhon and the title track rip, shred and tear their way into your ear holes but the most impressive and effective songs are the last two on the album and also happen to be the two longest songs with each running in excess of 9 minutes. Deify The Stormgod is the best of the two and the highlight of the album. It is simply absolutely glorious with a wholly epic feel and an opening riff that could cause neck injuries. It is also the most melodic sounding song on the album with the inclusion of some clean, chanted vocals which mix well with the unhinged screams and snarls of frontman Sadistik Vrath.

Forked Tongues blew me away when I first heard it. It has a very old school sound to it and the songs all have a frantic feel which I love in my thrash which is mixed well with the atmosphere and malevolence of the black metal. Also feel slightly annoyed at myself that a band this good (and a British band at that) has eluded me until now. Any self respecting extreme metal fan should definitely give this fantastic album a spin.