I have to admit, I'm a bit of a Fanboy when it comes to German veterans Rage, ever since hearing 'Perfect Man' back in '88, they have never let me down in over 30 years. Not only that, but they are also one of the most prolific acts on the scene. 'Resurrection Day' sees that band hit their 25th release, well under the Rage moniker anyway. Now not everything always goes to plan in the Rage camp and since the 2020s 'Wings of Rage', after a 3-album run of stability, there has been another change in personnel, again in the guitar department, with Marcos Rodriguez departing the ranks. All perfectly amicable, with it being a private personal matter, which unfortunately meant he couldn't continue, Now, before his departure, it turns out the band was in the process of modifying the line-up by adding a second guitarist (this seems to be an increasingly common phenomena, especially among German bands, what with both Sodom and Destruction recently expanding from three-pieces to foursomes), the guitarist being Marcos' Diolegacy (a Dio tribute act) partner Stefan Weber. But with Marcus' departure, it saw Peavy looking for another guitarist. Luckily, Jean Bormann, already known to the band through their management company, stepped up to the plate, to fill the new position.

So with this unwelcome upheaval, how does 'Resurrection Day' come out? Well on first listen, I have to say I was a bit underwhelmed; this isn't an unusual thing with Rage though, I've lost count of the times I've given a new album a spin and thought, oh that's a bit bland or unmemorable, only to find myself a few days later singing a chorus, only to find it's a new Rage song. This one is no exception, the classical intro 'Memento Vitae (Overture' (Memory of Life) is suitably grandiose and bombastic, and segues seamlessly into the title-track, a song that nails all of Rage's colour's to the mast, it's fast, heavy, catchy, with lots of riffs, thumping bass and pounding drums while at the same time having full orchestration to back it up. Lead single 'Virginity' is a short, sharp piece, the direct heaviness of this track harks back to older Rage albums like 'Black in Mind' the dual guitars really working well. 'A New Land' and 'The Age of Reason' are fairly standard Rage thrashers, plenty of hooks and guitar parts all backed up by the solid drumming of Vassilios "Lucky" Maniatopoulos. Even though Peavy is approaching his 40th year releasing music, he still has the ability to surprise every now and again, 'Arrogance and Ignorance' sees him employ some blackened vocals into the mix, which although is an interesting experiment, I'm not sure if it adds much to an otherwise very strong track. 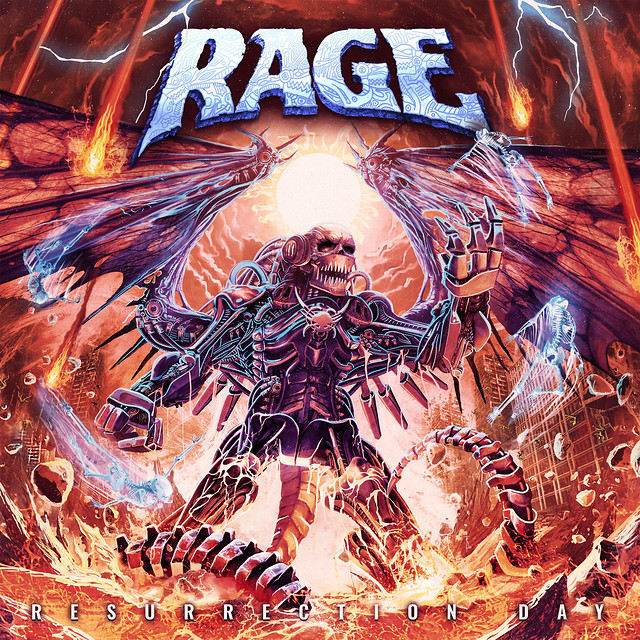 Much like his 'Death' vocals on 2012s 'Serial Killer', they seem a bit unnecessary and even a bit gimmicky. Still kudos for trying something different. A song that is a bit different and works really well is 'Travelling Through Time' which on initial listening is very, for want of a better word, odd. It has an almost Russian folk song feel to it, and apparently, it's actually based on some medieval music. Once you get over the initial shock, it really works well and is a definite album highlight. 'Black Room' is another surprise addition, a very atmospheric piece, with more orchestration, and acoustic guitars, Peavey gives one of his best vocals of the album, and my only complaint is it's positioning in the track list, coming as the second to last song, it robs the album of its momentum, and might have been better positioned in the middle. 'Extinction Overkill' does somewhat make up for this, as it is a real balls out thrasher and ends the album with you wanting more.

As always, Rage has done it again, I'm going to have to rename Peavey 'The Postman' as he always delivers. Production wise this is probably the best the band have sounded since '21', not that they have been lacking, but this one has a bit more bite, but also seems a bit more organic, the drum sound in particular is huge. It's not difficult to hear why these guys are one of my goto bands, when they produce stuff this good every 2 or 3 years, there's no reason not to listen.