If you are as old as me, you’ll likely remember Alcatrazz from the mid-1980s. Formed in 1983 playing a blend of melodic and progressive hard rock, this is the band that featured an unknown guitarist called Yngwie Malmsteen and then another young talent by the name of Steve Vai. From 1983 to 1987 the band, which featured former Rainbow and MSG singer Graham Bonnett alongside jimmy Waldo and Gary Shea (keys and bass respectively), released three albums before breaking up.

There have been several reformations in recent years, with ‘Born Innocent’ released in 2020, but the current situation appears a bit unsavoury, with Bonnett having taken the band’s name and his ball one way joining with guitarist Jeff Loomis, whilst Shea and Waldo have also retained the name and moved the other route with Mark Benquechea on drums and Joe Stump on guitar, and have now welcomed the vocals of Doogie White to the band. White is a bit of a rock n’ roll nomad, having done his time over three decades with numerous bands including the higher profile of Richie Blackmore’s Rainbow, Rising Force and of course, Michael Schenker’s Temple of Rock and Fest.

The first thing to say about this album is that the sound is massive. The production is unsurprisingly crisp and polished, but still allows for opportunity to let the band release the demons. The interplay between the musicians is top quality, with Stump’s flashing guitar skills the perfect foil for Waldo’s keyboard flourishes. With Benquechea and Shea locking everything down rock solid, it’s an opportunity for White, now hitting his early sixties to let fly with those famed pipes. 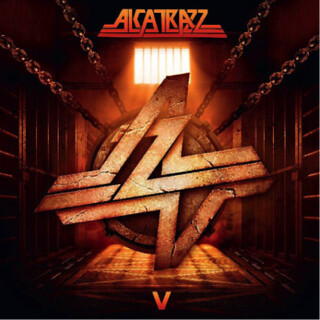 ‘V’ is an album that contains enough steel to appeal to those who like their hard rock with a real spine, but it undoubtedly will also find a home with fans of the more melodic style of rock, for there is ample melody here. From the opening track ‘Guardian Angel’, featuring the thunderous drumming of Saxon’s Nigel Glockler and the pounding bass of Riot’s Donnie Van Stavern, it’s pretty much heads down, classic rock with a contemporary feel.

Current single ‘Sword of Deliverance’ shows the band can still write a catchy number that sticks in the memory, with Waldo’s keyboards working alongside Stump’s virtuoso display. Whilst Bonnet for many is the voice of Alcatrazz, White is talented enough to stamp his own take on the Alcatrazz sound. His range copes comfortably with the songs, from the racy ‘Nightwatch’ and the Rainbow-flavoured ‘Turn of the Wheel’, the Celtic sounds of ‘Blackheart’ through to the rather laboured plod of ‘Maybe Tomorrow’, one of the weaker songs on the album.

If there is one complaint it maybe that the album doesn’t quite grip the attention as much as you might wish. I did find myself wandering the latter part of the album. The album clocks in close to an hour in length and despite the superb musicianship on display, I’d say it’s about two songs too long. Dropping the ballad ‘Dark Day for My Soul’ which closes the record out would have been a good idea too in my opinion; it’s a horrible song. Apart from those minor grips, ‘V’ is a solid release that deserves to get some attention.