There are many things in life that are certain and one of those is that when Blood Red Throne releases a new album it is going to be a very solid and very heavy release. The Norwegian death metallers have certainly met those expectations with Imperial Congregation which is the tenth album from the band but in some respects they have slightly exceeded expectations as this is easily the best album the band have done in a good while.

Blood Red Throne have been bludgeoning listeners since the bands formation in 2008 but although they have a loyal fanbase they have never attained the acceptance or popularity of some of the other death metal acts that emerged around the same time which is a damn shame as when it comes to single minded bone crushing death metal Blood Red Throne are experts at their craft and nearly always deliver. Unlike a lot of death metal bands who have splintered off into other subgenres such as technical death metal or brutal death metal, Blood Red Throne very much hail back to that quintessential 90’s death metal sound whilst at the same time maintaining a contemporary sheen. Here on Imperial Congregation the band sound absolutely enormous and better than ever with a killer mixing and mastering job by Ronnie Björnström at The Mixroom - Enhanced Audio Productions but they also have the material to hand to impress as well. Songs such as Itika, Conquered Malevolence, 6-7 and Consumed Illusion are massive slabs of death metal savagery with crunching riffs, a pummelling rhythm section that could cause structural damage, massive grooves and the unholy bowel loosening deep growls of frontman Yngve “Bolt” Christiansen. Equally there are songs where the pace is slowed and the grooves are deepened such as Transparent Existence and album closer Zarathrustra. In normal circumstances the slower songs could be seen as a bit of a breather but this is death metal and these songs are heavier and uglier than their faster counterparts. 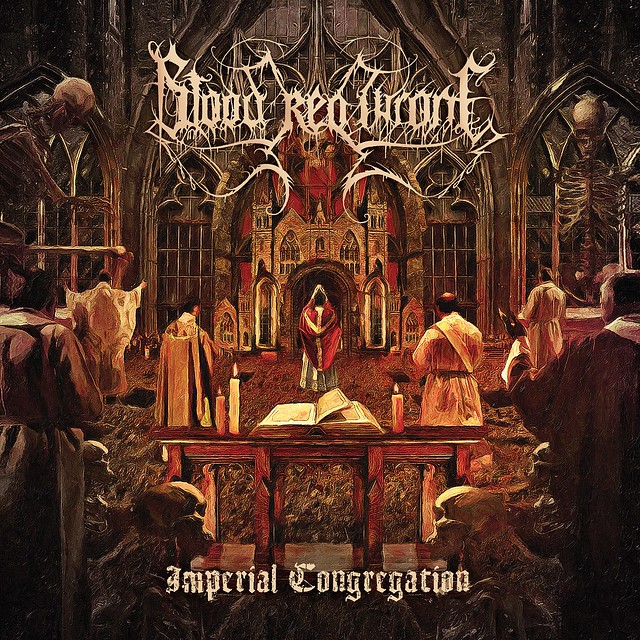 Blood Red Throne are a rather predictable band and you generally know what you are gonna get from them but with Imperial Congregation there seems to have been some fine tuning to their sound meaning that it just hits that bit harder. Yes this is the same groove heavy 90’s style death metal which the band have been blasting out for over 20 years but damn it sounds astoundingly good. Like I said earlier Blood Red Throne are a bit that seem to be a rather overlooked band in death metal but with their signing to Nuclear Blast Records for this album hopefully they will expand their fanbase and finally get some more recognition for the superb death metal they have been releasing over the years. This is as straightforward as it comes for death metal but if it ain’t broke don’t try and fix it. Imperial Congregation is another face ripper of an album from one of the most reliable bands in extreme metal.