Unless you have been living under a rock over the past 10 years the Denver, Colorado band Blood Incantation will have crossed your path. Over this 10 year span the band have been right at the top of the resurge of the old school death metal sound, and what helps them to stand out is in part is down to their use of strong atmospheres to compliment their fierce and uncompromising death metal sound. Following a series of demo releases and a split with fellow Denver band Spectral Voice, Blood Incantation delivered 2 formidable full length records in 2016 and 2019. Both releases delivered massive progression into experimentation with cosmic atmospheres and psychedelia. 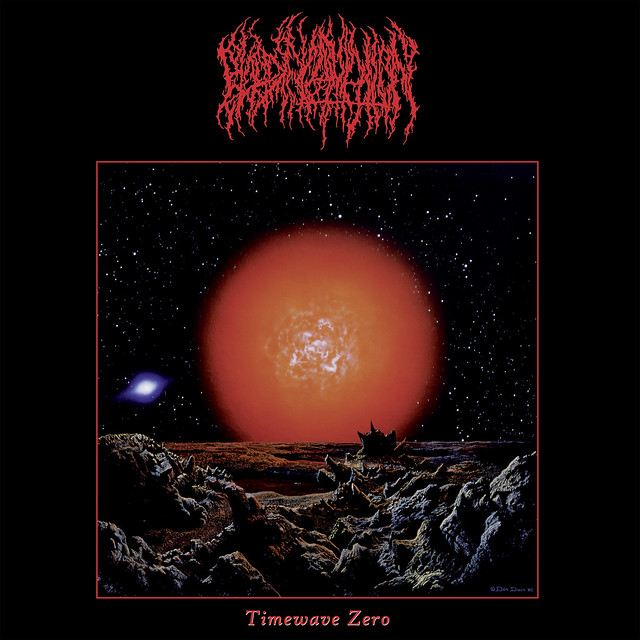 So when you have provided 2 exceptional pieces of death metal, you go out and produce a third right? Nope that is way too easy and with Blood Incantation’s new release which is titled Timewave Zero the band come so far out of left field with an approach that will catch you off guard. Focusing on the cosmic sounds that the band have used within both full length albums which helped to create the epic dimension to the albums, the best and most honest way to describe Timewave Zero is to call it a cinematic score, as that is exactly how it comes across. The release is made up of continuous ambient and synthesised loops which show gradual growth with each passing minute, you could see this creation being used in a multi million dollar Hollywood sci-fi blockbuster with how it creates a vivid atmosphere for the listener.

Timewave Zero showcases Blood Incantation and their progression as artists, they have proved what they can accomplish with death metal, and this release showcases their ability to create a huge sounding musical landscape through the use of nothing but atmosphere. I’m no way a listener to ambient music but I appreciate how it can be used within a musical vision and this release gives a better understanding of the craft involved with this type of musical creation.