Squalid banks of rain swept down Bristol Street as day two began and metalheads emerged hungover and bleary eyed. Its inevitable that partying hard on day one brings with it the casualties and as the morning progressed news filtered out that several bands had also become collateral. As such, the running order was a fluid beast until mid-afternoon with Green Lung pushing their set back to the special guest slot with Red Rum taking the headline slot or graveyard shift, depending on your perspective.

Taking the opening slot on the main stage were Lullaby for a Unicorn who had played at the same event two years ago. A strange band, with a bassist dressed as a unicorn, the singer donning a Hawaiian shirt and the drummer modelling his approach on Vinnie Paul. Musically, they are an amalgamation of several different styles, with elements of thrash, hard rock, and other genres. Ultimately it was all a bit forgettable with their music not really sitting long in the memory. They played hard for a sparse crowd who were appreciative of their endeavours, but this was a challenging slot to fill with a rather subdued audience. 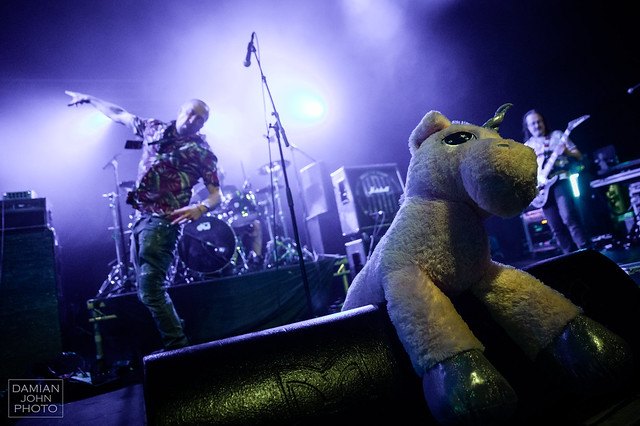 In comparison, Manchester Blackened thrashers Wolfbastard hit hard and fast on stage two. Their latest release ‘Hammer the Bastards’ is a real raw slice of filthy metal and the three-piece brought their self-depreciating humour to a fiery 35-minute set that raced by. A combination of older tracks plus some goodies from the new release ripped the flesh and there was even threat of the odd two note solo from guitarist Des (Derek Carley, Burial, Foetal Juice). Unsurprisingly, the band complained about being hungover, nothing unusual for this lot. Musically it was the metaphorical equivalent of a feeding frenzy, with thrashing, smashing, and crashing all thrown in the pot. Alongside Des, bassist Si Fox added his own wit whilst drummer Dave Buchanan battered the kit in a way that suggested that he was most affronted by something it had said about his mother. The proof is often in the reaction of the crowd and by the end of the set not only was the room nicely full but there was also some of the biggest roars of approval heard all day. These boys are heading out on tour soon and I advise you to get to one of those shows if you can. 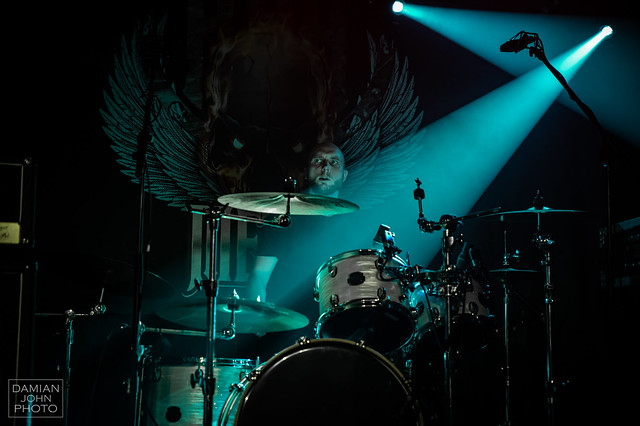 Back on the main stage the symphonic power metal of London’s Pythia was also warmly received by the slowly filling audience. The six-piece weren’t my cup of tea when I saw them in the same venue in 2017 and 2019 but I was more impressed this time around. Despite a muddy sound and the presence of the awful keytar, one of the most ridiculous instruments ever created, the band carved out some decent songs and Sophie Dorman is much improved as a singer, The armoured clad outfit gave it a real good effort and there were smiles all round at the end of their set. I’m still not sold on them, but this was a cohesive show with some decent touches. 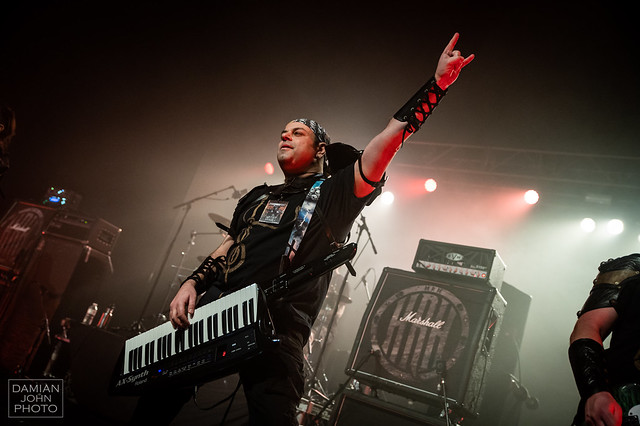 One of the main reasons I wanted to attend this year’s event was to see South Wales five-piece King Kraken on the main stage. In 2019 the band had wowed a full second stage and looked to have more momentum that a downhill skier, but Covid threw a stinger across their path. The band have used the time wisely, crafting their songs and preparing for their debut album (due later this year). A recent slew of gigs saw them match fit and after one initial nervy wobble, this was their hour. Opening with ‘Man Made Monster’, the Kraken quickly increased in tempo and confidence and blasted through a mighty hour of thunder, fire, and brimstone. The rapidly filling hall was soon nodding along, fists and horns thrust to the sky as vocalist Mark Donoghue, now resplendent in fetching olive coloured kilt, roared commands from centre stage. New tracks sounded great, with ‘Veins’ and ‘The Walls of Jericho’ particularly memorable. Kraken didn’t forget their older music, with a rip snorting ‘Freak’, the bursting ‘War Machine’ and some excellent audience participation for ‘Chaos Engine’. Having overcome any nerves quickly, this was a professional and confident Kraken who are finally having the opportunity to make up for lost time. With several Kraken t-shirts seen in the crowd, it seems that the gods may at last smile. 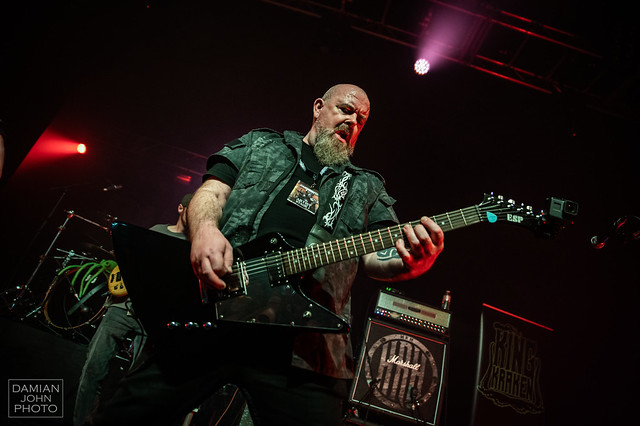 Whilst Kraken relied on their musical firepower, it was visual stimulation all the way as rising sensations Ward XVI as they delivered their theatrical production. Now, I want my music to do the talking, although I understand why some may want the filmic excitement to support what they watch. I’m not hugely familiar with the stories that Ward XVI weave, although their concepts about the torture of Psychoberrie, the inmate of Whittingham Asylum clearly resonate with many, for whatever reason! With nightmares coming to life on stage, monsters weaving around, and bodies being stuffed into bins, this was a show you either bought into or not. With so much happening on the stage it was a challenge to listen to the music, and I’m afraid the distractions proved a bit much. What I did hear was decent enough, but not something that would have me racing to pick up either of their albums. Reliant on huge amounts of backing tracks and effects, Ward XVI’s theatrics left me a little cold. There were many in the crowd who felt otherwise, and they do what they do very well. Later in the day many fans were seen chatting to the band members, a sure sign that they had been well received. Ward XVI embark on a UK tour shortly, so maybe get along and see for yourself. 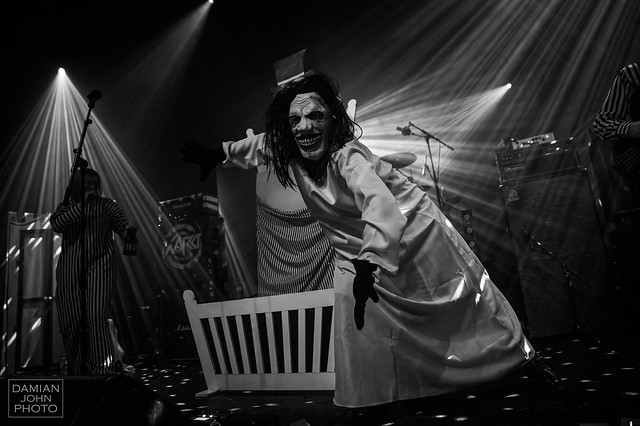 Racing upstairs to stage two, it was time for final band of the day there. Due to the withdrawals, only four bands had the opportunity to play on this stage and one did wonder why a couple of bands from the cramped stage three weren’t offered the opportunity to get a go on the bigger setting. It was London thrashers Bangover who had the job of closing off Hammerfest on stage two. Now, if you are looking for a slick, polished and totally in control thrash band, Bangover are not your lads. This was a car crash of the most enjoyable kind as the quintet careered all over the place, all with a smile on the face. They weren’t helped by a muddy sound that left the guitars sounding like radio feedback. At one point I thought there was a swarm of bees in the speaker, such was the tinny feel to the solos.

You know that it might be you when the band on stage is having more fun, but this was certainly the case. Bangover’s loose and free thrash was unleashed, allowed free reign and the result was chaos. Kicking off with the title track from their recent E.P. ‘Close Encounters of the Thrash Kind’, it appeared that bassist Alexander Comley was intent on obtaining a groin strain with repeated high kicks and spinning moves, whilst vocalist Andreas Morelli repeatedly spun around so often, I thought he might throw up. The grins got wider; the thrash got faster. Big grins, huge enjoyment, and a full room to watch a band who clearly just do what they do! 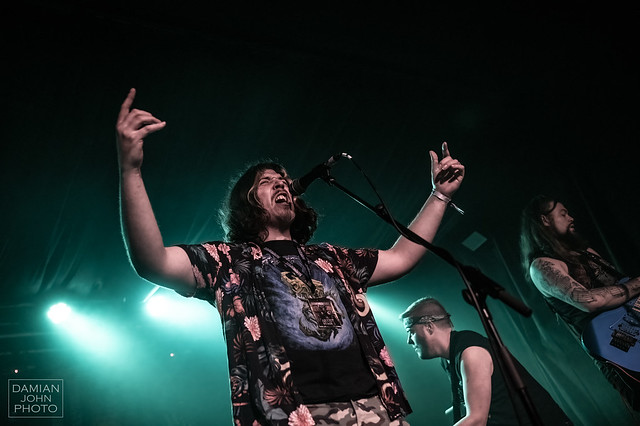 In October 2020 Nottingham thrashers Incinery released their second album, ‘Hollow Earth Theory’. It was an album that took some getting used to but was ultimately a fine release and one that I still listen to regularly. There was a change in the band’s sound, moving to a more progressive and groove-based style. Having been moved from the second stage to the main stage at short notice, Incinery had a big job on their hands, made even more challenging by the absence of guitarist Jason Chaikeawrung, absent on parental leave. Step up replacement Rhys, who had, we were told by vocalist James Rawlings (who gave a commanding performance), three weeks to learn the set. You wouldn’t have known as he didn’t put a finger wrong. And neither did Incinery. Taking the proverbial bull by the horns they ripped through a 40-minute set with a ferocity that was hugely impressive. I hadn’t seen them for a few years but there is a confidence about the band that is pleasing. Their sound was huge, and thankfully reasonably clear.

Opening with ‘Savage Land’, the setlist was drawn from not only ‘Hollow Earth Theory’ but the band’s previous long player ‘Dead, Bound and Buried’ as well as their two earlier E.P.s. It made for a solid and enjoyable set, with the band switching from track to track with ease. The new tracks in particular hit harder live with extra muscle added. This was probably the thrash performance of the weekend for me and Incinery will be on my list of must sees again. 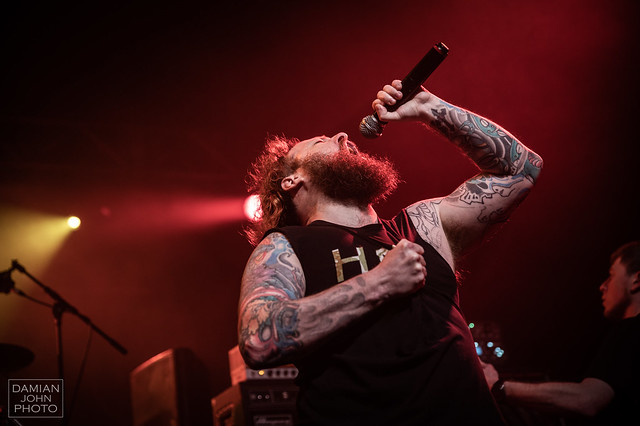 As the day began to draw to its conclusion, there was time for an impromptu dip into stage three for 20 minutes with Bad Earth and this turned out to be one of the best decisions of the weekend. The North Walian based band have undergone some line-up changes in recent times, but with a seven-year history as well as experience in the metal and rock scene over the years, Bad Earth embraced their last-minute call up and smothered it to death. Huge riffs, anthemic song writing and all delivered with a humour and passion, it was no surprise when spontaneous bouncing and moshing broke out in the decent sized crowd. Tracks including ‘120 on the 55’, an ode to breaking the speed limit on the North Wales expressway at night, got the crowd energised again. There are multiple influences on their sleeve, and if you enjoy the likes of Motörhead, Clutch, Orange Goblin, COC and Baroness then you need Bad Earth in your life. 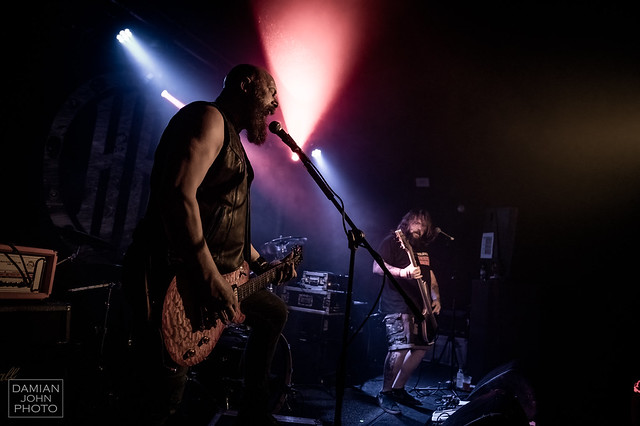 Having released one of the albums of 2021 in ‘Black Harvest’ but then been struck down with the plague before their highly anticipated slot at Damnation last November, it was with relief that Green Lung arrived on the main stage. Their set had been pushed back, but this was the band many had been waiting all weekend to see, as the main room was as full as it had been all weekend. It’s not hard to understand why. Put simply, Green Lung are sublime. Riding the crest of a very much deserved wave, the London outfit get better with every show. For some, this was their first encounter with the dark occult music, but for others, this was another opportunity to belt out tracks from ‘Woodland Rites’ and ‘Black Harvest’. Tom Templar’s unique delivery remains amongst the best in the metal world, whilst the whole band were sharp and on point. They are currently on tour in the UK, and it showed with a professional and intensely rewarding set. There are many highlights to pick out but storming renditions of ‘Woodland Rites’, ‘Leader of the Blind’ and a furious ‘Let the Devil In’ all stood out. Intense, interactive, and incredibly energetic, this is a band that are truly on their way up. Probably the best band of the entire weekend, this was a truly stellar performance. 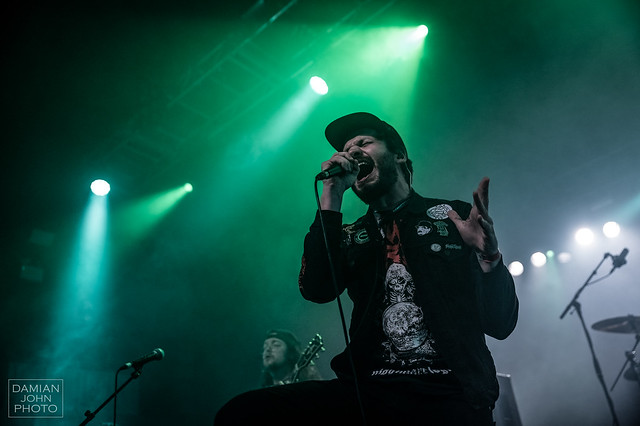 With the greatest respect to Red Rum, there was no way that they were going to follow that and with no food available in the venue, it was time to bid farewell to Hammerfest for another year and hunt out my dinner. A strange on this time around, with an often sparse and slightly subdued crowd. It was still a fabulously enjoyable weekend and with next year’s line-up looking tasty with Lordi and Primordial in top spots, I hope to be back once again. 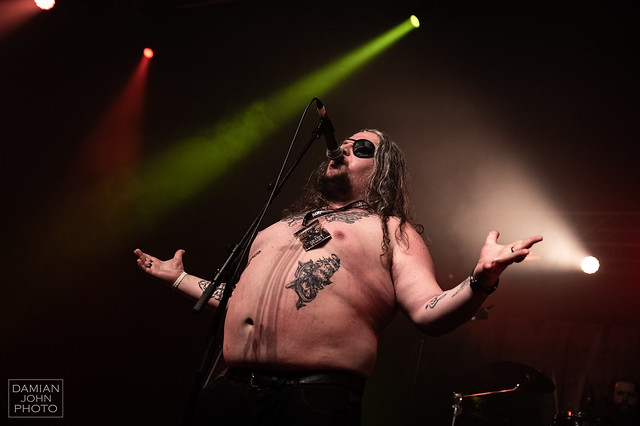