"'Rock Until You Drop’ is the best LP to emerge out of the NWOBHM since Saxon’s ‘Wheels of Steel’." So spoke Geoff Barton of Sounds on 19th September 1981. Whether you agree with that statement or not, if you were around at the time, the North-East’s purveyors of athletic speed metal were certainly a leading light in the scramble for recognition at the time. I reviewed the band’s re-release of ‘All for One’ almost a year ago to the day, and it’s worth repeating what I said then: “Raven were the ones that really should have burst through the net and conquered all before them. Their prototype speed metal was ahead of its time and their first three albums were fantastic, culminating in the fine ‘Live at the Inferno’ double live album that captured the band at their ferocious best.”

We’ve dropped back to the band’s debut album with ‘Rock Until You Drop’ which has now received the full Cherry Red treatment. This is an extravaganza to behold, for not only do you get a remastered version of the full album with four bonus tracks added, but there are three other discs, which for some is probably too much Raven but for those who have either followed the band or dipped in and out of their career over the past five and half decades, there is much to savour. Disc two contains several early demos, whilst discs three and four contain live recordings from Sasso Marconi in Bologna recorded in December 1982 and seven songs from their show at Manchester Apollo in May of the same year. There’s also an interview with the band to finish off. This is accompanied with a detailed booklet that contains some early photos of the band in the mid-1970s when they were a five piece, as well the more usual yet still quite alarming sportswear clad shots from the debut album era.

For a debut album, ‘Rock Until You Drop’ is quite the release. Bursting full of power, with John Gallagher’s intensely high-pitched vocals and the full fury of a traditional power metal trio, it’s still a superb record when you listen to it today. The band are totally together, with drummer Robert ‘Wacko’ Hunter bashing hell out of his kit. The opening duo of ‘Hard Ride’ and ‘Hell Patrol’ still sound ace whilst the short musical interlude of ‘39-40’ remains a demonstration of the band’s rarely heard subtle side. Elsewhere it’s the crash, bang wallop approach that was to serve them well on those first few albums. It’s certainly of its time, with a few tracks sounding a little dated but overall, it is still worth your time if you’ve never heard it. 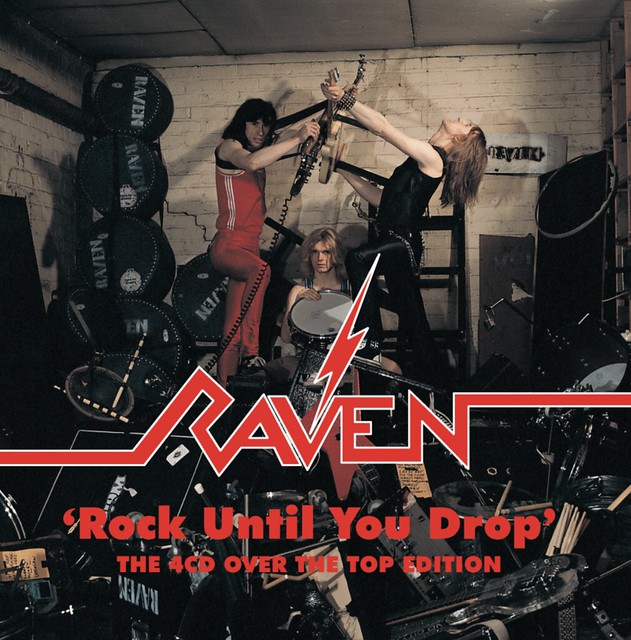 Disc two is interesting for the rawness in the demos. There’s a more basic style to the band’s music, but they still rock hard with the bass totally dominating the proceedings. You can’t help but tap along to the pulsing driving music, which at times resembles a blues trio, albeit one that has taken some steroids! It’s basic at times, with the quality of the recording exactly as you’d expect but the power of the band certainly comes through in these versions and they provide an interesting if non-essential insight into the band’s early workings.

That leads us to the live discs. Hmm. It’s always a challenge with recordings that are 40 years old and these two are no different. There is enough included here to capture the voracity of the band in the live setting, with John Gallagher’s incredible vocals just as piercing live as they are on record. The band sound reasonably tight, and although it’s not as polished as Live at the Inferno’, it does capture Raven in their early prime with much of the set drawn from ‘Rock Until You Drop.’ The muddy production doesn’t help although it isn’t so bad that it detracts from the overall performance. You also get the chance to experience not only a drum solo, but a guitar and bass solo as well! The live tracks from Manchester follow a similar style, even though they were recorded several months before the Bologna show. The same tracks unsurprisingly feature, with the ten-minute ‘Tyrant of the Airwaves’ probably the pick of the songs.

This is another quality package of re-released material. Whether I would be sufficiently seduced to purchase it is another question, but as a reminder of the origins of one of UK metal’s most unique bands, it’s certainly a lovely trip down memory lane with dreams of what might have been still vivid.