When TOXIK announced that they were releasing a new album, 33 years after ‘Think This’ (1988), for many it was very exciting news, I mean 33 years is a long time to wait in anyone’s book. I remember listening to ‘Think This’ back as a 17-year-old in my good mates, brothers bedroom - Gary and Darren (RIP mate - and after it finished we were more than a bit awe struck. The level of technical riffs and musicianship all topped off by the OTT banshee like vocals of Charles Sabin, and not only that, the cool concept of media control, which was well ahead of the game, and is still just as valid today, if not even more so, were like nothing we had heard before.

The band hasn’t been completely inactive in the three decades since the last full-length album, TOXIK has been semi-functioning, although the band’s line-up has always been fluid (founder, main man, guitarist, song writer, Josh Christian being the only constant). An aborted third album, with original vocalist Mike Sanders from the debut 'World Circus' (1987) was at least partially written and recorded (and later released as an EP and as part I of III works). A truncated EP ‘Breaking Clas$’ with ‘Think This’ vocalist Charles Sabin was actually released in 2017, and lastly, a live in the studio album ‘Kinetic Closure’, which was a bunch of re recorded tracks, both old and new, with a brand-new line-up, and introduced current vocalist Ron Iglesias, was also released in 2018.

So, onto release number three properly, starting with the odd but perfectly placed title track 'Dis Morta' itself (which I think means "this death"), with its spoken intr, a strongly religious and prophetic overtones, and weird discordant instrumentation. All this before a chugging riff and a piercing wail from Iglesias, who I have to say easily matches both previous vocalists Sanders and Sabin before the song itself kicks in properly around the two minute mark. It has a twisting technical lead before the band step on the gas and head for the finish with a lurching ease, even squeezing in a tasty acoustic ending. ‘Feeding Frenzy’ follows, and if you were a smidgen worried that there wouldn’t be enough speed or heaviness on show, this will alleviate those thoughts immediately, thrashing with impressive, yet unsurprising, whirling technicality, and a short and direct chorus. After this first eight and a half minutes or so, it’s blatantly apparent that TOXIK are back, and not only firing on all cylinders, but they have also added a turbo charger. New guys Shane Boulos (bass), Eric van Druten (guitars), Jim DeMaria (drums, Heathen), slot into their positions with consummate ease, providing a rock solid, yet constantly shifting bedrock, for Christian and Iglesias to perform their histrionics. 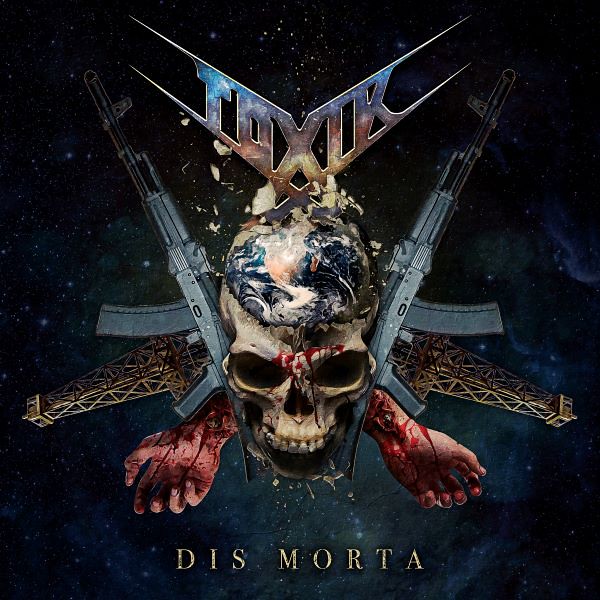 One thing that always slightly marred the previous albums was the sound, both were recorded at the legendary Morrisound studios, and although not exactly shabby, the guitars were always a little bit thin, and the snare sound a bit ‘splashy’. 'Dis Morta' on the other hand sounds absolutely massive, a modern and well-balanced mix which provides a full and rich overall soundscape with all elements being given equal priority and space.

Going through individual tracks on this sort of release is always difficult, as there is so much going on, a sentence or two never really does justice, so I won’t go into too much detail, suffice to say the usual traits are here plus some new as well, there’s also little interludes and intros which add to that bleak, dystopian futuristic atmosphere. The aforementioned ‘Feeding Frenzy’ and ‘Straight Razor’ are the most basic cuts, and I mean basic in the loosest terms. Lyrically the band hit on similar themes as before, social engineering, dystopia, mass control through technology and religion, etc. all are intelligent and as thought provoking as the accompanying music.

The mid-album duo of ‘Hyper Reality’ and ‘Creating the Abyss’ are undoubtedly the centrepieces here, both pushing the bands envelope and scope to new levels of songwriting, bizarre tempos and sudden time changes, flowing leads, and riffs, yet all underpinned with hooks and subtle melodies. Don’t be fooled by the ballad-like intro to ‘Devil in the Mirror’, it soon morphs into an aggressive writhing monster, before ‘Judas’ finishes it all off with a schizophrenic, serene, then frenetic finale.

If you were previously a TOXIK fan, I think it’s safe to say you’re not going to be disappointed with ‘Dis Morta’, it’s easily the worthy successor to ‘World Circus’ and ‘Think This’. If you somehow missed the band in the eighties, and if you’re a fan of the likes of CORONER, REALM, WATCHTOWER, MEKONG DELTA, BLIND ILLUSION, etc, this is well worth a listen. For younger listeners, this is for those who like HEXEN, HAVOK, CRYPTIC SHIFT and especially VEKTOR. If technical, progressive thrash isn’t your preferred choice, then I still recommend a listen, it might take more than a few spins, but this album, like its precursors, more than rewards that patience, believe me, you’ll thank me in the long run.

Bottom line: This is a modern classic.