We've interviewed Cage Fight twice already this year, but just after their set at Bloodstock we got the chance to sit down with the voice of the revolution, Rachel Aspe, for a catch up.

The Razor's Edge: It’s day three of Bloodstock, Cat from The Razor’s Edge here with Rachel of Cage Fight. How are you doing?

The Razor's Edge: You've just come off stage, how was your set today?

Rachel: It was amazing! It was our biggest show and I think people liked it, we really enjoyed it.

The Razor's Edge: There was a huge crowd at the Sophie Stage, were you expecting that?

Rachel: Not at all actually. For the time in the afternoon it was a very big crowd.

The Razor's Edge: You’re doing a couple of shows now without James who is on the road with Tesseract. How is the new guitarist settling in?

Rachel: It's very different and I think it is good that it is different. He is a friend of our drummer so we are good friends already.

The Razor's Edge: We've spoken to James a couple of times already this year. You've been really busy, you've toured with Sepultura, you've been out with the Cro-Mags. Every time we see you your audiences get bigger. After Bloodstock today whats next for you? More shows?

Rachel: We have a few shows. We haven't planned a proper tour just yet and we are playing a small festival in October and I think another one in September. But then we are going to start to write. 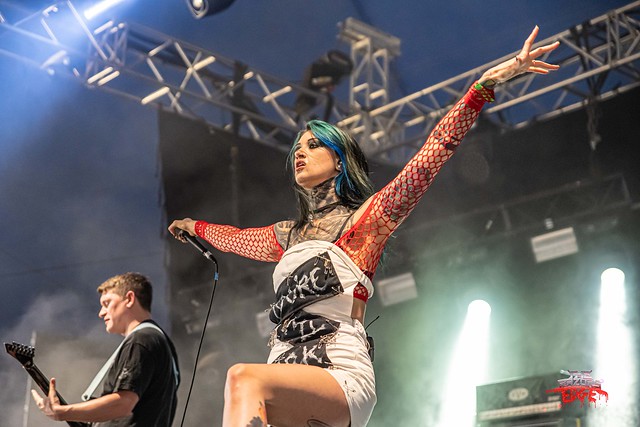 The Razor's Edge: I think it's really good that this year at Bloodstock we are seeing a lot of female musicians, I think that inclusion is very important to hopefully pen those floodgates for more women to come through.

Rachel: Yes, I remember the first band I saw with a female member and thinking it was amazing and now the inclusion is growing. When I stepped off stage the first encounter I had was with a young girl, she came up to me and she said she started to scream when we came on stage. She loved it. So with more inclusion hopefully that will inspire others.

The Razor's Edge: What are you doing with the rest of your day? Are you going to check out any of the other bands?

Rachel: I would like to catch Sylosis and Malevolence later tonight. I'm going to sort of see and soak it all in.

The Razor's Edge: Are you here all weekend or do you as a band have other commitments?

The Razor's Edge: What are you plans tomorrow?

Rachel: I’ve have this big list and I need to look through it, I was so focused on todays show I haven't decided who I will see tomorrow.

The Razor's Edge: We know you're really busy today, so we won't take up any more of your time. It's been lovely to chat with you Rachel.

Rachel: Thank you so much!

Check out our previous interviews with Cage Fight!