Momentum. When you have it, you don’t even think about it. You forget the struggle, the hard work, the blood sweat and tears that got the ball rolling. And then you pick up speed and if you’re lucky, you get a downhill stretch where the momentum looks after itself.

In terms of thrash metal bands, Hellfekted have been picking up momentum for a few years on the bubbling, vibrant and rich British thrash scene. Touring under the “Trifecta” banner (alongside Thrasherwolf and Blacklist) and playing anywhere with a stage, amps and beer. They have put in many miles, made many smiles, and with intensity in their playing that you might think it’s their last ever show, every single night, they have momentum well and truly behind them. 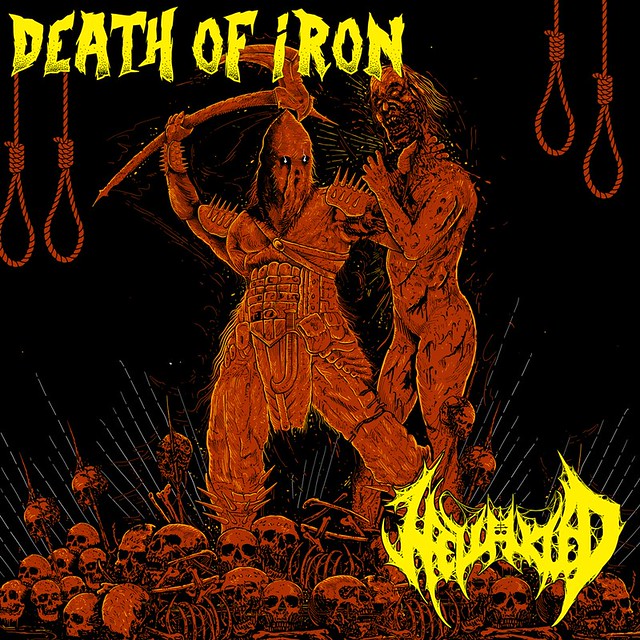 What better way to keep momentum turning in their favour than by releasing their most accomplished song yet? If you have caught them live you could be forgiven for expecting a fast, insane track that will incite circle pits in sweaty dives the world over. Think again. ‘Death of Iron’ is a slower, more head banging inducing song, that will see arms linked together by total strangers and uniformed banging of heads in sweaty dives the world over.

Harmonised guitars and tribal drum patterns greet the listener at the door, followed by industrial samples and loops that give the song a nice texture. At various points in the song you get massive drops that are going to sound incredible live. The vocals morph from classic thrash screech to death metal growls, but pitched perfectly and hold the colossal riffs together and guide us through the six minutes of thrash. No quickening of pace, just a stomper that’s heavy and as intense as their faster songs.

I think the British scene, and maybe the band themselves, thought that the build of momentum was leading to their triumphant set on the New Blood stage this year at Bloodstock Festival. On the evidence of this single, the momentum is going forward bound. The brow of the hill is in sight, Let the force of momentum take Hellfekted to the next level.

Check out our interview with Hellfekted at Bloodstock below!