Wil: Green Day’s, American idiot. It was the right album at the right time in my teenhood. It made me definitely want to spend the rest of my life chasing rock music.

James: The Wall - Pink Floyd. I remember hearing my dad play it when I was young and was so interested in it. It’s been my favourite album since I was 15 and still is. Plus it’s the best album to smoke one too…

Chris: I think your early records always affect you the most. For me as a teenager learning guitar, I bought the By The Way album by RHCP and learned every song. It was so much fun I couldn’t believe people did it for a living. It inspired me down the path I now find myself.

Tommy: The Clash - Sandinista. I’ve always been a huge fan of The Clash but Sandinista was a standout album for me. It showed the evolution of British 70’s punk into what became 80’s new wave. A real turning point in popular music in my opinion.

Luna Kiss: Nile Rogers – Adventures In The Land Of The Good Groove… The artwork is a map… maybe it will help us?

Luna Kiss: No one. I mean, after spending so long in a band together, you know how to handle each other. You know how far you can push each other. Also, what if they don’t like Kronenbourg? The bar on the island only stocks Kronenbourg and we wouldn’t want anyone else here moaning about how they’d prefer a Pimms or something… Unless they have a dinghy haha. 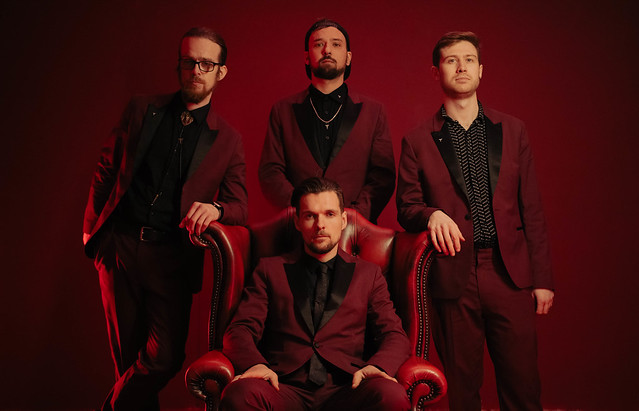 Luna Kiss: When we were last in Germany, we ended up having a day off somewhere in Bavaria and we ended up in this hotel/bar where there was a guy singing and playing Dire Straits covers on an acoustic guitar. If we could find a recording of that guy, that’s what we’d have in our walkman because it was a nice memory, everyone drinking, laughing and having the craic. It was great. Actually… How long are we stuck on this desert island for again???

Luna Kiss: Les Claypool from Primus. He wants to be a fisherman and I assume he can sail as he wrote an album about sailing the seas of cheese.

Find out more on Luna Kiss: