For nearly three decades two legends of the heavy metal world have been good friends. Jon Schaffer (Iced Earth) and Hansi Kürsch (Blind Guardian) have toured the world and played to hundreds of thousands of fans in their respective bands. Twenty years ago they first collaborated on what would become the very first Demons & Wizards album, a second album followed in 2005, but over the past fifteen years the project has laid somewhat dormant. That is until now when the pairing join forces yet again for the projects third album, inventively titled ‘III’.

Iced Earth have always skirted the fringes of power metal, often being described as a cross between Iron Maiden and Metallica but never far from the expansiveness of the power metal genre. Blind Guardian on the other hand have always been fully fledged members of the aforementioned section of the heavy metal community. Demons & Wizards allows the pairing to explore the boundaries of their song writing, stretching the envelope and seeing how far they can push themselves. Make no mistake ‘III’ is rooted in power metal but Schaffer particularly allows the sound to go beyond that. 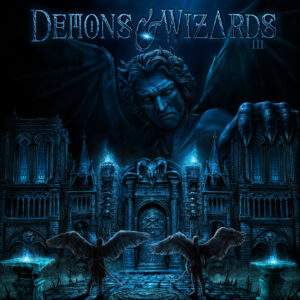 Opening with ‘Diabolic’ full of instrumental melodies and accompanied by PA’dam Chamber Choir shows exactly where this project is heading; extremely melodic but intertwined with Schaffer’s ferocious technical guitar solos.  ‘Wolves in Winter’ takes us away from that, brash riffs and chanting take us into the song which expands into a monolithic beast. The chugging main riff is hypnotic enticing you in and allowing Kursch’s vocals to grab you. This song in particular has the pace and power to make it the stand out track.

The album as a whole fluctuates between the melodic ballads of ‘Final Warning’ and ‘Timeless Spirit’ to the more majestic, powerful song of ‘Dark Side of Her Majesty’ and to the more anthemic songs of ‘Midas Disease’ and ‘Split’.

The album blends a number of styles and the pairing produce a record that is both powerful, melodic and experimental in one encompassing release. A record that fans of either artists other work will find solace in.