The ache of longing for live music continues. It seems that apart from the odd socially distanced event, things may stay in a state of flux for some time yet. I fear for the optimistic tours booked for the New Year and Spring. In these strange times, where then do we take solace and refuge? The answer of course is in the music itself. It’s been quite an astonishingly amazing year for metal in terms of the quality of records that bands have produced. Every genre has as wealth of stunning releases that have maintained the faith, elevated the spirits, and stuck a giant middle finger at the whole pandemic situation.

Add to the list of simply superb releases ‘Glow’, the second album from Hertfordshire’s Countless Skies, and the follow up to 2016’s ‘New Dawn’. I had the privilege of having this album very early to review for another publication, and it has remained on repeat ever since. It is that good. Now on Willowtip Records, ‘Glow’ is aptly named. It warms the heart, it uplifts, and it restores your faith. If you caught the band stepping up to the plate at Bloodstock in 2019 then you’ll know exactly what I mean.

The bulk of the album was recorded in the home studio of guitarist James Pratt, with the final touches perfectly mixed and mastered by Juho Räihä of SoundSpiral Audio. ‘’Glow’ features guests Arianna Mahsayeh on cello, Marcello Ciciriello on piano and Anthony Trimming (King Goat), RJ Learmouth and Vicky Harley as choir on ‘Summit’. 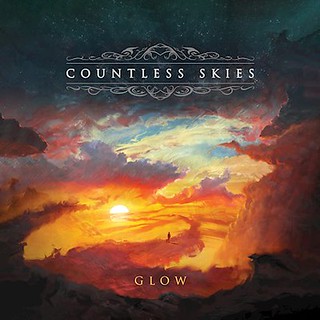 Fans may already know opening track ‘Tempest’. It’s a beautiful blend of progressive melodic death metal, a soaring soundscape of sonic delight. Switching from darkness to light in an instant, Countless Skies have drawn deeply on all the best that the genre has to offer, vigorously shaken it and then added a huge serving of their own flavour. Absorb yourself in ‘Summit’, which is an aural experience of exceptional quality. Blasting segments of death metal, ferocious double kicking, and walls of crushing riffing shift to delicate melodic ethereal sections which increase the tension as the track rebuilds. Clever use of Mahsayeh’s subtle cello and the choral trio adds to the tempo and drama.

The mid-section of ‘Glow’ is by no means a weak point. ‘Moon’ is a complex beast, the layered textures, James Pratt’s cutting guitar melodies, the ferocious changes between the growling and soaring cleans of Ross King and the powerhouse rhythm section of bassist Phil Romeo and drummer Nathan Bradshaw in perfect synchronicity. It’s intricate, dynamic and pushes you to work hard to listen, the multiple time changes and mood swings most definitely part of the appeal. The delicious solo that fills the mid-section takes the tempo back into the stratosphere, as the band’s ability to ease back then floor the accelerator kicks in. Similar feels on ‘Zephyr’. A melodic intro with vocal harmonies, a bass line that links with the drum patterns before the song secures a more metallic edge, the sonic emotions are truly tugged. At times you can hear the likes of Insomnium, Opeth and the like but there is nothing copycat about Countless Skies.

Having caught the breath, what follows next takes things to another level. The three-part title track is a phenomenal crafted piece of work. ‘Part I’ ebbs and flows, effortlessly moving between pulverising heavy death metal, atmospheric elements and even dipping into black metal with a smoothness that is breath-taking. It’s this track that does echo the masterful style that Opeth have trademarked, with Mahsayeh’s cello and Ciciriello’s piano returning to add a beautiful depth and feeling. The track seamlessly segues into ‘Part II’, and by now the best thing is to relax, close your eyes and allow this masterpiece to envelope you. Such is the intensity and passion that this section provokes, you may well be feeling exhausted. If there is anything left in the tank, this will be drained by the finale of ‘Part III’. It’s an ecstatic conclusion.

If ‘Glow’ was a painting, it would be framed in the Tate and allowed only fee-paying viewers. Thankfully for us, it is much more accessible. If there is a better album in 2020, I’ve yet to hear it. But don’t take my word for it, take your own deep dive into this stunning release, and tell me I’m wrong. I’m confident you won’t be able to do so.