This week I decided to step out of my familiar comfort zone of thrashing guitars, pounding bass, crashing drums and screaming vocals, and set myself a bit of a challenge with an artist I wasn’t familiar with, but when I heard about Jo Quail, her work intrigued me a great deal. Jo is a Cellist, a musician of daunting talent, don’t’ expect any Metallica covers or other such gimmickry ala Apocalyptica, not that Apocalyptica aren’t without merit, but Jo Quail is in a completely different field.

‘Five Incantations’ is a reissue of the album originally released in 2016, on double coloured vinyl, with a bonus live version of ‘The Breathing Hand’ performed with the Choir of The Capella Gedanensis and Alicja Lach-Owsiany in Gdansk. 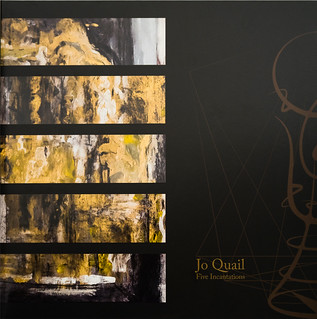 Consisting of 5 separate yet linked tracks ‘Five Incantations’ is an album that was conceived in Australia, whilst Jo was on a tour, where for some unknown reason, she felt drawn to a vital or spiritual source, similar maybe to the native Aboriginals and their close connection with the earth. Performed in 432Hz, a frequency that is thought to be the natural frequency of nature, I don’t know enough about this topic to comment subjectively, but there are plenty of articles about it on the internet, both for and against it. All I know is while listening to this work of music, I did feel a soothing effect and a state of calm.

I don’t know enough about how the album was recorded, but looking at a few videos online in a live setting, Jo performs these tracks as a soloist, slowly and painstakingly building the basic tracks, using loops and other effects to create the percussion and a solid foundation to form over it a complex, emotional canvas of music which carries you away from yourself to another plane. I’m certainly not going into specific tracks as the separate compositions join all the pieces to form one tremendous singular motion. I will mention the bonus live track. It is a spectacular end to a tremendous album and adds even greater depth to an already fantastic track.

This isn’t going to be for everyone and isn’t something I will be listening to on regular basis, but I will certainly be listening to Jo again. And speaking to a few other fellow contributors for this site, who have seen Jo Quail live, and both have said she was “stunning and mesmerising”, that’s someone to add to the list of artists to see live.

My final thoughts: A quite unique and utterly amazing musician, and I’m very glad I choose this as my choice of review this week.

ICYMI - Check out our interview with Jo here.