Funnily enough - the last band I saw live before the whole world shut down was Decapitated. The 6th of March 2020 Decapitated invaded Berlin together with Ingested, Beyond Creation and Lorna Shore as a part of the ‘Faces of Death’ tour package. Not a bad show to be the last one for over a year…

Decapitated is truly a European death metal treasure and an introduction is probably completely redundant. However, I digress because when listening through the demo songs on ‘The First Damned’ it is important to acknowledge their early origins and undisputable genius. Formed in 1996, Decapitated have been sharpening their sonic battle axes to perfection, ultimately becoming one of the most respected death metal bands in history. Undeniably the coolest kids in Poland at the time, guitarist Wacław "Vogg" Kiełtyka formed the band at the tender age of 15, together with kid brother drummer Witold "Vitek" Kiełtyka and singer Wojciech "Sauron" Wąsowicz aged 12 and 16 respectively. These kids weren’t messing around. It took a while to complete the lineup with a bassist; I can only imagine the scarcity of adequate death metal bassists in their early teens in 1996 Krosno, Poland. Luckily, 13 year old Marcin "Martin" Rygiel was available to mangle the four strings for the boys and Decapitated set out for world domination. I hope they packed a lunch. 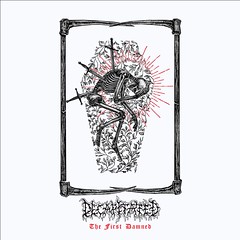 Death metal in the late 90’s was wild. Cannibal Corpse released an album almost every year during the whole decade and overall the genre experienced an infusion of different musical influences. Especially Scandinavian bands like Children Of Bodom, In Flames, Arch Enemy, Amorphis and Amon Amarth took this to heart. What’s even more prominent is the increased technical precision in the music. Decapitated released their massive first demo ‘Cemeterial Gardens’ in 1997 and just a year later they unearthed their second demo ‘The Eye Of Horus’ which subsequently landed them a record deal with Wicked World (subsidiary to Earache Records). Now, Decapitated wasn’t only equipped with a cool band name and a will to play extreme music. No, the polish youngsters said “hold my piwo” and smashed their hammers straight into the established death metal landscape with an extreme force.

In the band’s own words ‘The First Damned’ is the first steps that the band took as teenagers. No re-mastering, no remixes, no bullshit. Of course some of the songs on ‘The Eye Of Horus’ ended up on the band's first full-length release ‘Winds of Creation’ in 2000, but to me these songs never sounded better than what’s presented on ‘The First Damned’. The music itself is very polished, but the rawness gives it that extra edge which I find so enthralling. From start to finish the songwriting is extremely refined. And not “for their age” - not one bit. Decapitated came out swinging from the get-go and produced top-tier death metal from the very beginning. Keeping the age aspect in mind when listening to the songs makes it even more impressive, though. Just take a moment to really listen to the jaw-dropping guitar frenzy in ‘Cemeteral Gardens’ (also note the perfection of the china hit at the end of the song) and the immaculate precision by 13 year old Vitek in ‘Way To Salvation’. Jumping back and forth between the two demos there is a notable elevation in technique, finesse and brutality in the first part of the compilation (which is the second demo ‘The Eye of Horus’). Increasingly complex compositions are showcased in ‘The Eye of Horus’-part, complete with layered beastial vocals in ‘Nine Steps’ and of course the gracefully haunting instrumental song ‘Danse Macabre’. And don’t get me wrong, I love Slayer and ‘South of Heaven’ is one of my favourite albums of all time - but Decapitated’s cover of ‘Mandatory Suicide’ is simply incredible. I even prefer this version over the one which ended up on ‘Winds of Creation’ just because of how raw and heavy it is. Sauron’s interpretation of Tom Araya’s vocals adds another layer of terrifying as he grunts “suicide” over and over again...

‘The First Damned’ is hard proof that the successes of Decapitated never were achieved by chance. They came out the gate with raw aggression, delivering apex death metal and have continued to dominate the genre with their brand of technical violence. This collection of demo tracks is for anyone who appreciates the history of Decapitated and death metal.

And they were just kids.... ‘The First Damned’ out via Nuclear Blast June 4th