If ever there was a one-man project, this is it. This over indulgence into one person's mind has the pretentiously titled Epoch of Chirality. The album title is suitably indulgent 'Nucleosynthesis'. This is an exercise in the creative freedom that only one persons mind can produce and is a wonderful journey through a sci-fi world of aliens and intergalactic wars (I say that, however there is no dialogue whatsoever during the course of this album, as much as the creativity and imagination expands a mere mortals brain capacity, we don’t get any lyrics). The album is the brainchild of Richard, a multi instrumentalist with a huge talent and an ear for the soundscape. 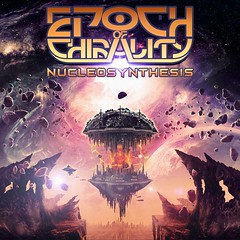 The sound on the record is made up of layered and textured synthesizers over real sounding drums. It is what the three members of Tool minus Maynard would sound like if they decided to play 'Fanfare of the Common Man' whilst attempting to get onto the new War of the Worlds LP. Each of these songs has a massive MOOG sound of the 80s that Rush perfected after they stopped making 12 and a half minute epics.

Unbeknownst by you, you have heard some of these songs before. Think of the last band intro tape from the last gig you went to, quite some time for most of us. The opening track 'Dawn of Chirality' sounds like an extended version of just said intro. The track 'Undercity Rising' could have been used on a cult propaganda film, all exploding landmarks and incorrect information. 'Pyramid Cybergod' would have been used for the beach scene in Chariots of Fire if they were to produce a remake with robots instead of athletes and 'Labrinth' sounds like it has been used on pretty much any BBC athletic or sporting montage going.

The live sounding drums keeps every metal fan interested but make no mistake, the programming and keyboard sound are the prominent feature throughout these tracks. The songs drive along nicely and one could argue that it's metal without the guitars but as a friend once said to me “you should never trust a band without a guitarist” on this album you'll have to listen to see if that is true or not!