What do you call a trio of three-piece metal bands? In this case, just bloody awesome. It was a warm and balmy night in Bristol, ideal for a cool pint in a shady beer garden. Not for the hardcore 100-150 or so souls who decided that the altar of heavy metal was where they wanted to be. And if the temperature in the venue was not as fiery at the start of the evening, by the time those fans poured outside seeking the cool night air three hours later, the three US bands had stoked the fires better than ol’ Nick himself. Fast, furious, and always powerfully heavy, this was an evening to savour. Midnight and Night Demon were both casualties of the spate of festival cancellations, although this tour, may have at least soothed some of the wounds which were still very raw.

Sadistic Force hail from Austin, Texas. They are savage. No other word is needed. Exploding on the stage in a hail of punishing riffs, this was a spraying of heavy blackened thrash that hit every target. There’s little subtlety on display. Instead, the band simply hit the accelerator and do not let up. Guitarist and vocalist James Oliver fires his lyrics in a rapid, demonic delivery, his riffs cascading from his guitar in a frenzy of beer and sweat. Alongside him, the drawl of long-limbed bassist and backing vocalist Blaine Dismukes may have amused some in the audience, but that didn’t worry the lower end merchant whose energy was exceptional. His constant racing around the stage was exhausting just to watch. Anchored by the pounding of drummer Jose Alcarez, Sadistic Force are aptly named. With one album, the excellent ‘Aces Wild’ under their belt, Sadistic Force were not here to make up the numbers and by the time they hit the ‘Snowblind in Texas’ (yes, it’s a version of the WASP track), the first pits of the evening were well underway. The discovery of the evening for many, Sadistic Force earned many new friends. 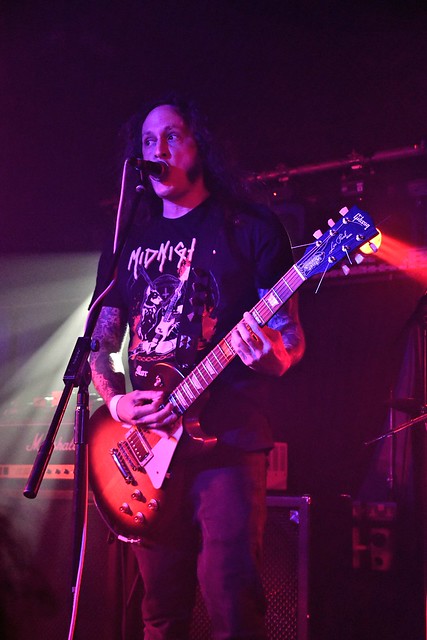 The first time I meet The Razor's Edge deputy editor Tim Finch was in the photo pit at KK’s Steel Mill in Wolverhampton a few years ago. That night, Night Demon were the main support to thrash legends Sacred Reich. Their performance was impressive that night, but this was another level. From the opening bars of Screams in the Night, Jarvis Leatherby and guitarist Armand John Anthony didn’t stop moving. 45 minutes later, Leatherby could wring out his shirt, such was the amount of sweat that he’d produced. But all the energy in the world doesn’t disguise it if you aren’t a good musician. This trio are exceptional. Tighter than the proverbial duck’s rear end, Night Demon live are crushingly heavy. Much heavier than on record. Leatherby is the amiable front man, genuinely pleased that there was such a good turnout on a Monday evening. He’s also a bruiser of a bassist and no bad singer either. Behind them, Dusty Squires, muscular and shirtless hammered seven shades out of the kit.

There’s a uniqueness about Night Demon that is rarely matched. The band incorporate many different influences, throw in snippets of other bands at will, such as the intro of Motorhead’s ‘Overkill’ which segued perfectly into ‘Dawn Rider,’ whilst their turbo charged version of Thin Lizzy’s ‘The Sun Goes Down’ appeared to be played with the riff from ‘Jailbreak.’ The arrival of the band’s mascot, Mr N Demon brought a touch of the theatrics, but this is no novelty act. Even the resting of Leatherby’s ‘pipes’ whilst the band thundered out the instrumental ‘Flight of the Manticore’ fitted perfectly into the set, and when the classic ‘Night Demon’ brought their 45 minutes to a breathless end, it was only the need for air that prevented the largely stunned audience from demanding more. 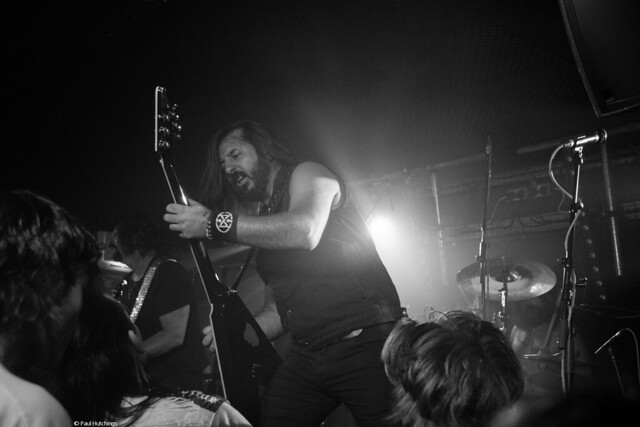 Still winded by the opening salvo from Sadistic Force and the relentless battery of Night Demon, It was with some trepidation but mainly anticipation that drew the crowd back to the stage for the final act of the evening. A blistering hour of blackened thrash from Cleveland one-man machine Midnight. Athenar is the man behind this mystery outfit. With five albums to his name, this is no fly-by-night outfit.

Accompanied by his masked cohorts, Athenar and co present a striking, slightly intimidating proposition. How they manage to play at such breakneck speed, sing and race back and fore in their hoods is a mystery but they do it, despite the huge volume of sweat that gathers and spirals off each band member during parts of the evening.

It’s the music that is the draw though and Midnight’s punishing blend of black and speed metal draws deep in the soul of most metal fans. It’s a throwback to those early prototype bands, Venom, Raven, Motorhead, even Slayer in their infancy. And it works incredibly well. Yes, the formula is pretty static, but it’s impossible not to bang your head to the likes of ‘Sex Witchery’, ‘Evil Like a Knife’ and ‘You Can’t Stop Steel’, such is the intensity that the band generate. Climbing monitors and amps, and even a foray off the stage at the end, It’s all great fun and hell of a show.

The only downside of an incredible evening of heavy metal was those hundreds, nay, thousands of fellow metalheads have been denied the opportunity to see these bands. Hopefully they will be back. If they do, you should make it a priority to see them. 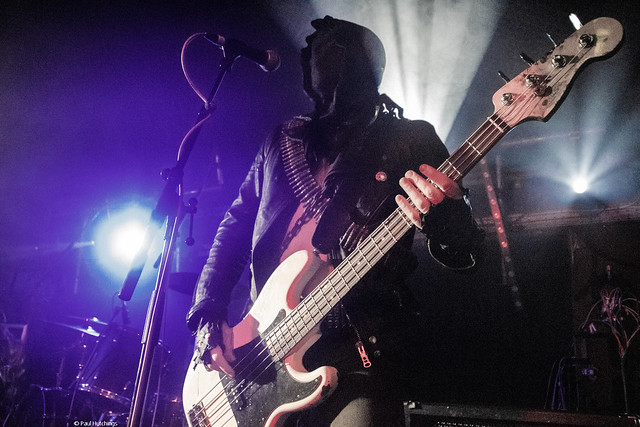 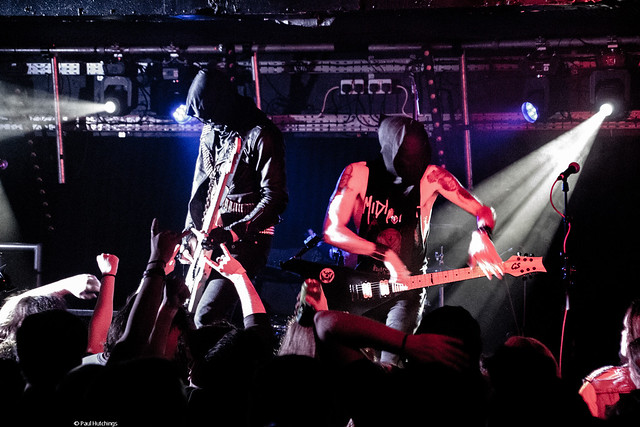 Check out out Midnight interview here!