As the year draws to its close and those long summer days at Bloodstock feel like eons ago; as the Halloween decorations are packed up and Christmas seems like forever away, there is one final light in the rapidly darkening future to look forward to: Damnation Festival. The year’s last event in the extreme music calendar and the perfect way to end the festival season with an Autumnal trip over to Leeds.

But it was on the other side of the Pennines that the Damnation story begins, in the city of Manchester.

The first Damnation Festival took place at Jilly’s Rockworld in Manchester, with the Music Box venue acting as the second stage. It was a pleasantly warm Sunday afternoon in October and for the paltry sum of £13 we were served up some of the country’s most promising and up and coming acts. Back in 2005 the UK’s Extreme music scene was starved of a focal point, with the Download Festival working to establishing itself as a three day event and Bloodstock still considered to be a Power Metal festival, there was a definite gap in the market for something a bit more aggressive. 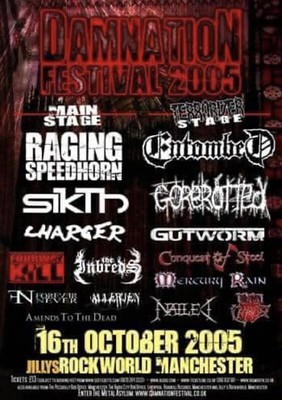 That 2005 bill did represent some of the cream of the UK scene at that time, with the likes of Fourway Kill, Conquest of Steel, Gutworm and Mercury Rain already having graced the stages at the Assembly Rooms and bands like Sikth and The Inbreeds looking to expand the horizons of the genre. Raging Speedhorn’s position as main stage headliner may appear odd when viewed from a fifteen-year distance, particularly when the Swedish legends, Entombed were on the smaller stage downstairs. But at that point, Speedhorn were already establishing themselves as real contenders: they had after all opened the main stage Ozzfest bill at Milton Keynes Bowl in 2001, a billing that included Slipknot, Tool and Black Sabbath, and had blagged a spot on Rammstein’s Mutter tour in 2002.

The positivity of the event laid the foundation for future festivals and the organisers managed to put together a successful show with little or no experience of so doing.

The Swedish connection continued in 2006 with The Haunted named as main stage headliner for the October event. At that time they were enjoying the fruits of their reunion with Pete Dolving and the success of the rEVOLVERr record. 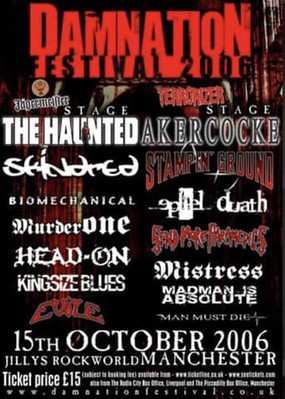 The bill followed much the same process as the previous year, with the cream of the UK scene acting as support to the big-name headliners. Down in the Music Box, Akercocke took the top slot, riding the wave of success they had been enjoying since signing to Earache and releasing the Choronzon album. By 2006 they were a year into touring its follow-up and smashing it with every performance.

Damnation’s organisers have never shied away from pushing the boundaries and back in the mid-noughties, with Metal looking for a broader identity, bands like Skindred, Murder One and Ephel Duath were a step away from the usual Metal festival bookings.

The 2006 festival saw the final show of gore-fiends Send More Paramedics which was a real shame as they entertained with their sets as much as they rocked.

2007 saw the event shift across the Pennines, relocating from Jilly’s to the Metropolitan University in Leeds. With the shift of venue came an obvious step up in the bookings. No disrespect to the bands who played in those first couple of years, but snagging the likes of Kreator and Anaal Nathrakh who back then were not the touring machine they have become, was a coup and that Raging Speedhorn had dropped down the bill from headliner to a mid-placing demonstrated Damnation’s upward mobility. 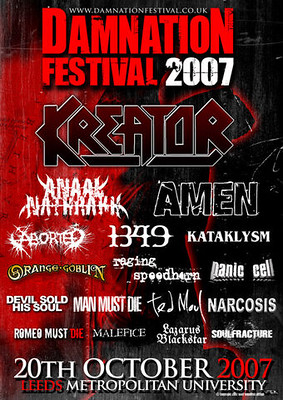 2007 was probably the most eclectic bill to date, with a mix of thrash, black, sludge, death and even Amen’s take on punk to entertain the masses. An unfortunate incident with some of 1349’s pyros marred the overall safety record of the shows, but luckily the issue was not too serious.

Damnation’s place in the Heavy Metal calendar was beginning to be established as mid-October but for the 2008 show the date was driven back to the end of November. Another venue shift, this time to the labyrinthine University of Leeds, would see this years’ festival being a massive, almost unwieldy, event. The reason: Damnation had secured the one and only UK show of the Carcass reunion tour. 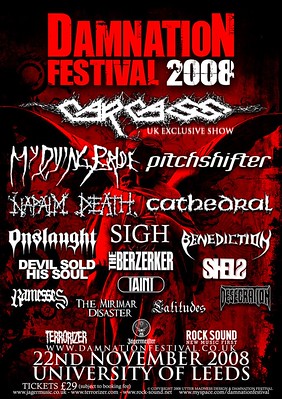 Buoyed by such a booking, the Damnation team decided they would lay down a marker and went on to book one of the strongest bills seen on these shores in many a long year. Not content with Carcass, they recruited Yorkshire locals and near-strangers to British stages, My Dying Bride, 90s Industrial kings, Pitchshifter, the Godfathers of Grind Napalm Death and, just to tease the punters that a classic Napalm reunion could be on the cards, Cathedral for the small stage.

The University was absolutely packed solid all day and getting around the venue was a real chore in 2008, with access to some of the rooms being denied due to fire regulations. I managed to get into the second stage to see The Berzerker and by the time the Aussie grinders had finished their set there was no way I could pop out to see anyone else. Luckily for me it was Benediction and Napalm Death next, but I would have very much liked to have had the opportunity to see My Dying Bride play.

As you would expect the refectory was packed to capacity for the Carcass show and sometimes bands are unable to live up to the anticipation, but not Carcass, who arrived in Leeds and tore the faces off every single person in that room. 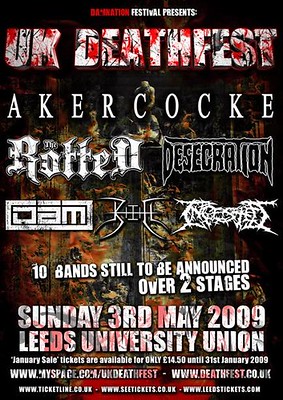 The undoubted success of the 2008 show imbued the Damnation team with a new vigour going into the fifth anniversary year, so much so that an additional show was pencilled in for early May in the shape of the newly-minted Deathfest. This was a truncated version of the parent show, with the refectory not being used and rather the smaller two stages being bumped up in significance. Polish legends Vader topped the bill and the addition of Repulsion added that something extra to the proceedings.

While the inclusion of Lazarus Blackstar and Dragged into Sunlight showed that the Deathfest was willing to open its doors to other genres, the spring show was very much anchored in a Death mode.

For the first time in three years the Damnation Festival took placing at the same venue as the previous year. Arguably the most eclectic of Damnation’s line-ups, the announcements leading up to the festival could not have been better placed to whet the appetite. Early confirmations of Lock Up, Anathema and Destruction suggested the festival would not be as top-heavy as the previous show, rather the quality would be spread out evenly throughout the day. 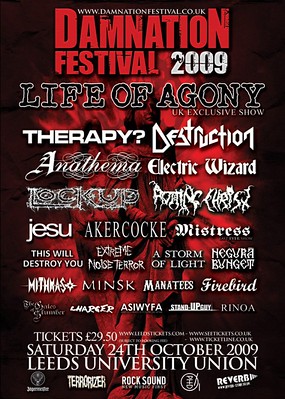 Reverting to the end of October, Damnation 2009 displayed a level of bravery in its billing that I would struggle to imagine other festivals matching. The second stage focused the majority of the aggression with killer sets from Akercocke and Mithras; the final ever show from Mistress was awesome and nothing needs to be said about the absolute quality of any Rotting Christ performance.

Down on the third stage Damnation was beginning to flex the muscles of its Unique Selling Point: Post-Metal. No other regular event invests in the genre like Damnation does and the booking of bands like This Will Destroy You, A Storm of Light and Minsk showed their commitment to bringing some of the best exponents of the art to the masses.

That Damnation 2009 booked Therapy? was monumental. That Damnation 2009 gave the main headlining slot to Life of Agony is proof positive that the organisers were willing to take risks. That the risk nearly didn’t pay off was nerve-wracking, but I salute Gavin and his team for having the fortitude to take it in the first place.

Rock Sound Stage: JESU / This Will Destroy You / A Storm of Light / Minsk / Manatees / And So I Watch You From Afar / Stand Up Guy / Rinoa 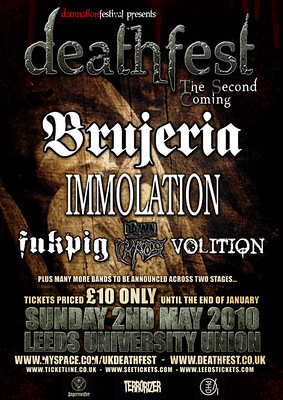 A new decade and the Deathfest returned for its Second Coming, again in early May and in the cut down format of the previous year. Brujeria and Immolation acted as co-headliners of a bill featuring a mixture of established acts and home-grown artists.

Singapore grinders, Wormrot killed it on the second stage with perhaps the set of the day, while the inclusion of Hour of Penance had many a Death-head drooling with anticipation.

It was obvious, however, that the attendance was low for the second Deathfest and that as an event it probably would not take place again. What wasn’t so obvious was the knock-on effect it would have on the main show in November. 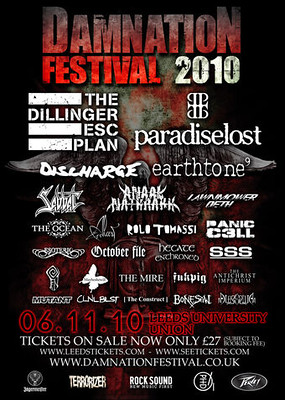 The 2010 festival was a reduced affair, using the same stages as the Deathfest had, yet the team put together another killer bill, regardless of the venues.

It takes brave bookers to mix bands such as Dillinger and Rolo Tomassi with the likes of Paradise Lost and Sabbat. Even more brave to slot Punk-legends Discharge into a second stage headline slot above Anaal Nathrakh, while combining the blackgaze of Alcest, the funeral doom of Esoteric and the post-punk blueprint of October File.

If the good-ship Damnation Festival was steering into stormy waters it takes a steady hand on the tiller to navigate the squall and, fortunately for all involved, smoother sailing was ahead.

Check back tomorrow for part 2!