Those extreme music lovers who are yet to pick up on Spiritworld are sleeping on one of the best new talents of a generation. Back in 2020 they exploded on the scene with their self released debut ‘Pagan Rhythms’ – reissued last year on Century Media. With a record deal now in the bag the band return with ‘Deathwestern’ an album title which describes the band perfectly.

They introduced themselves to the UK audience earlier this year with an appearance at Knotfest followed by their explosive show at Bloodstock. Frontman Sto Folsam explained the bands concept to us at Bloodstock (listen here) and Deathwestern is the next chapter in his “horror-western" vision for the bands storytelling.

The album opens with a classic western movie inspired introduction; ‘Mojave Bloodlust’ featureing a single acoustic guitar, horses neighing in the back ground, vultures circling overhead and sets the scene for the journey ahead. 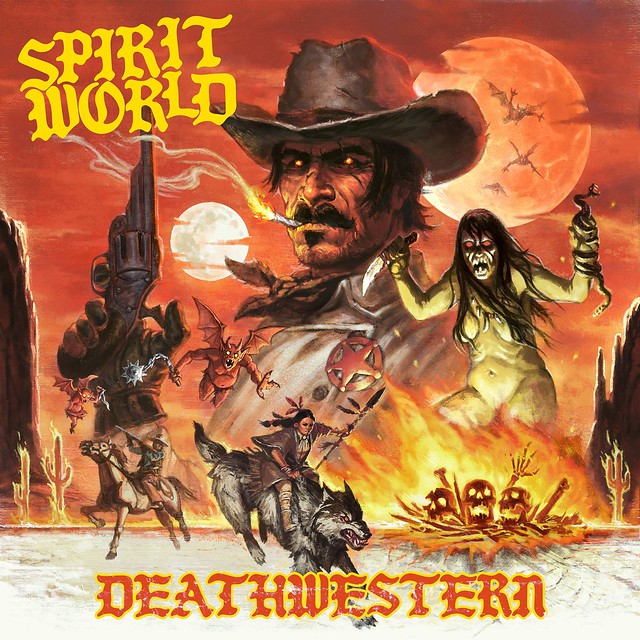 However, the listener should not get too comfortable with this! A minute and three seconds later title track ‘Deathwestern’ explodes into your ears, a barrage of drums with hardcore tinged riffs and vocals. In a matter of moments you’ve been taken from the rocking chair on your porch in the desert and been battered and bruised by the onslaught this band truly deliver.

Much as their debut album did, the band take that hardcore style, mix in a heavy dose of death metal brutality and even borrow the idea of a riff or two from Slayer. The introduction to ‘Relic of Damnation’ a perfect example of this as visions of Kerry King flash through the listeners mind before Stu Folsom’s raucous vocals bring you back into the horror unfolding in your mind.

The onslaught breaks slightly as the spoken word intro to ‘Committee of Buzzards’ steers the story telling in a new direction, however as soon as the band kick back in you realise the respite was only momentary for the mayhem continues.

A question raised by ‘Pagan Rythms’ was how could the band follow up on such an inspiring opus. ‘Deathwestern’ answers that question with ease. A continuing story telling aspect alongside the hardcore/death metal backing makes for a unique yet outstanding work.