It’s a new beginning for the UK’s premier festival of extreme music and an annual must-attend highlight of the year. Damnation makes its return to the city of Manchester after sixteen years absence, but it’s not without a touch of sadness that I won’t be journeying back across the Pennines, Leeds-bound, for the last big gathering of the year.

Progress is what it is and, as the labyrinthine environs of Leeds University had been outgrown, the cavernous confines of the Bowler’s Exhibition Centre beckons. I was here in the summer for Outbreak Hardcore festival, so had a reasonable idea of topography awaiting and, with Gav and his team putting together – arguably – the best Damnation line up yet, everything was primed for a hell of a weekend.

Last years’ pre-show was such a success that it had to be done again and, as the doors opened for the curtain-raising A Night of Salvation show, those with tickets had an early opportunity to get our bearings and plan the weekend’s entertainment.

2022’s Night might not have the immediate pulling power of last year’s Akercocke/Svabard/Orange Goblin/Raging Speedhorn combination, but the sheer intensity of the bands warming us up for tomorrow could almost be tasted in the air, from the opening notes of Mastiff to the closing bars of Celeste’s Le Cœur Noir Charbon. 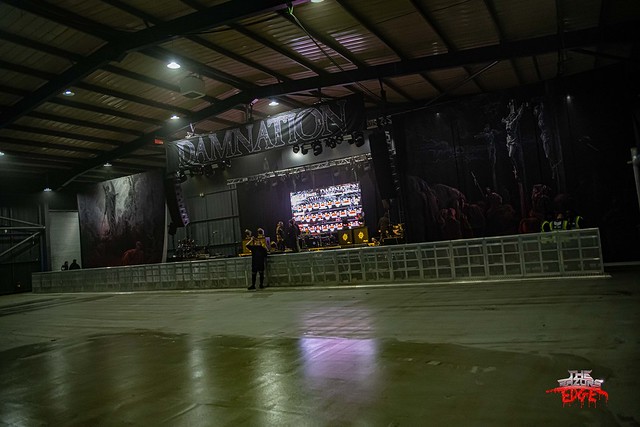 Mastiff kick off the Night of Salvation in fine style as they pummel the eager crowd at the Holy Goat stage with their sludgy hardcore sounds. As that definition describes, they have a great ability to mix up the tempo with the slow chugging heavy riffs being counterbalanced by some more frantic speedy moments.

Frontman Jim has the enthusiastic crowd in the palm of his hand as he prowls the stage around his band mates spitting out the vocals. This is a perfect way to start a festival in a new venue! Kudos too for the excellent Taylor Doe back projection! [JP]

This is the last Pupil Slicer show of the year and the final outing of the Mirrors tour which, let’s face it, has been a rather hectic couple of years for the four-piece. I was fortunate enough to be able to review Mirrors just prior to its release and to cover their Bloodstock set back in the summer, yet that all feels like prologue, as tonight’s performance is head and shoulders above the lofty heights already reached. From the dissonant feedback and neo-Jazz of the opening Mirrors are More Fun than Television, to the grinding conclusion of Stabbing Spiders, Pupil Slicer took us on a journey of self-discovery. Be it throwing dirty sludge chugs against razor sharp riffs or mixing Indie moments with some good ol’ rock & roll, the band never settle anywhere for too long, yet never suggest any lack of cohesion.

Focusing almost exclusively on Mirrors, we get the intense bludgeoning of Wounds Upon My Skin and Worthless, tracks that can stand toe to toe with anything a modern Deathcore band can offer; or the head-mashing Mathcore of Martyrs and Vilified, taking a leaf out of tomorrow night’s bill-toppers, Converge. The only track post-dating Mirrors was Thermal Runaway, and if this is a foreshadowing of things to come from Pupil Slicer, expect to be pummelled into mind-frazzled oblivion upon the release of the next new music. And, on a personal level, I’d like to thank Katie and Luke for signing my setlist – cheers, much appreciated. [DB] 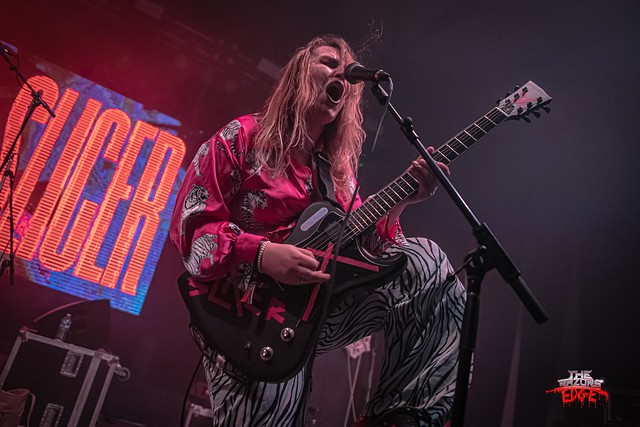 It feels as though some bands were meant to play together and, if Pupil Slicer have a natural Yang, then it is Ithaca; pairing them together for A Night of Salvation is a work of genius. In front of a floral projection - and fronted by the red be-dressed and sparkly eye-make up wearing Djamila Azzouz - you may be fooled into thinking Ithaca would be offering some respite from the surrounding chaos. No such chance, for Ithaca take all the dissonant rage and edgy Mathcore insanity and ramp it up to eleven.

Every song is another unrelenting explosion of polyrhythmic aggression, built on a foundation of pummelling beats and a massive bottom end, but it’s not without its moments of groove, necessary oases of relative calm, amid the enveloping squall; Ithaca even see the weekend’s first crowd surfer go over the top. The band seem genuinely surprised at the number of people who own copies of their latest record, but this year’s remarkable They Fear Us album has been garnering high praise from publications as diverse as Metal Hammer and The Guardian. However, the proof of the pudding and all that… and with the mass nodding of heads throughout Ithaca’s set, here is a band able to engage both the cerebral and those lower regions every rock band strives to reach. [DB] 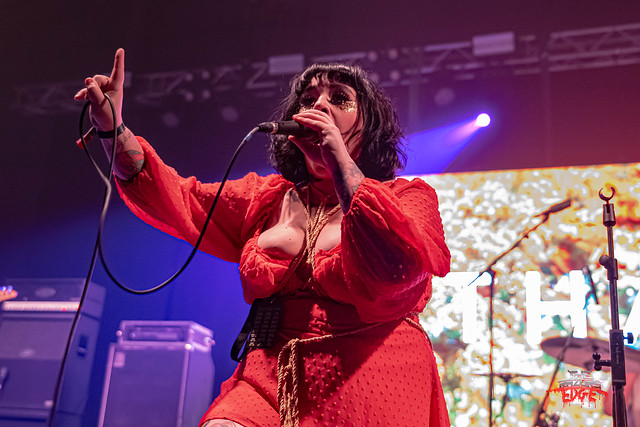 And then came the moment that Damnation head honcho Gav had been waiting for as Australian post rockers We Lost The Sea took to the stage to play their seminal album Departure Songs.Making their UK debut, WLTS undoubtedly made a lot of new friends with their emotionally stunning and energetic renditions of tracks such as A Gallant Gentleman and Bogatyri. Big respect to the sound person as WLTS sounded great from start to finish and whetted the appetite for their second set on the Saturday. [JP] 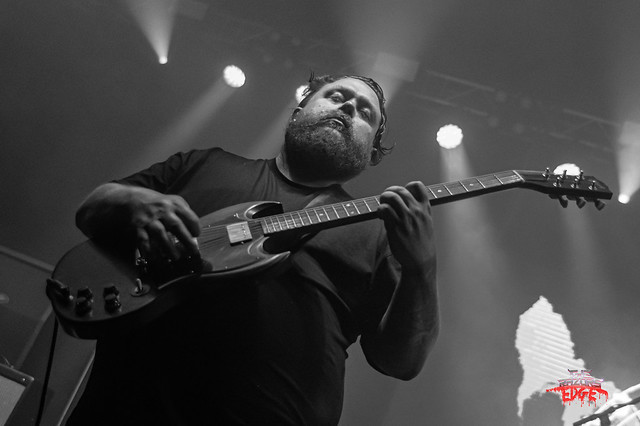 Such was the hypnotic, immersive splendour We Lost the Sea’s post rock masterclass that Celeste would appear to have their work cut out if they had any hope of ending this redemptive evening as anything but an after-thought. But, the Frenchmen don’t have nearly twenty years’ experience without knowing a thing or two about putting on a performance; so, with 2022’s Assassine(s) album full loaded, Celeste’s hit the stage ready to take no prisoners in the reclamation of the night.

Where We Lost the Sea brought a subtlety and fragility to their performance, the headliners come with blow after devastating blow of aural aggression. As is the case of many Post Metal bands, Celeste have their origins in the Hardcore scene, bringing that ire into longer and more complex compositions. The band don red head torches for Des Tres Yeux Bleus Perles, sweeping the crowd like a horde of hunting predators.

Assassine(s) merges elements of sludge, black metal and some post hardcore into its post metal stew, simmering through it relatively short – for a post metal album – runtime to emerge with the epic conclusion of Le Coeur Noir Charbon, leaving the Bowler’s crowd physically and emotionally spent.

As we spill out into the cold night, the promise of what lays ahead tomorrow at the forefront of minds, we pause and reflect on the truth of the matter: if the entrée is this good, what is the main course going to be like? [DB] 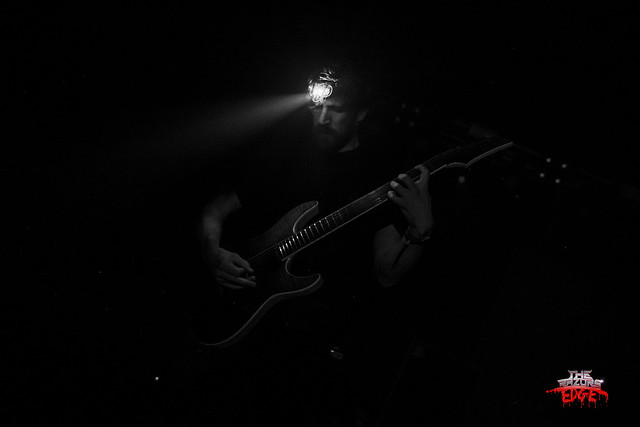 Check out the rest of our Damnation Festival coverage!